2009 will be a tremendous year for AEROSMITH, as the band plans its first album of original material since 2001, which it will support with an extensive summer tour. In celebration of these events and the band's storied accomplishments, a new 298-page book, "Aerosmith: Essential Interviews", is set for release through Rock Reader Books/Lulu on May 17, 2009.

Collecting some of the most honest and engaging rock and roll press interactions ever put to print, "Aerosmith: Essential Interviews" is available for advance purchase and immediate delivery at this location.

Beginning with one of AEROSMITH's first extended interviews in 1973, "Aerosmith: Essential Interviews" lets "America's greatest rock and roll band" tell its own inspirational story. Spanning the legendary hard rock quintet's 35-plus years, the book chronicles "the bad boys from Boston" during their explosive, drug-and-sex-steered early heyday and the propulsion of mid-'70s classics "Toys In The Attic" and "Rocks". The band's fall from grace and initial disintegration as a result of those vices is also explored.

"Aerosmith: Essential Interviews" documents how Steven Tyler, Joe Perry, Tom Hamilton, Joey Kramer and Brad Whitford not only survived those decadent experiences, but learned from them, evolved artistically and ultimately forged one of the greatest rock comebacks ever. 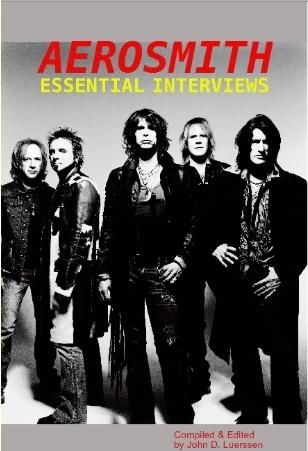