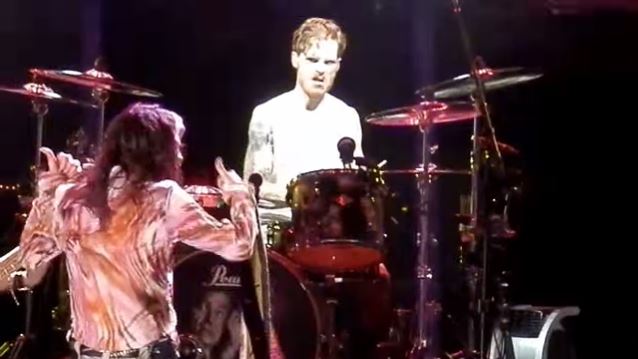 Jesse Sky Kramer, the son of AEROSMITH drummer Joey Kramer, is filling in behind the kit for his father on the band's current tour while Joey is on the mend after undergoing a minor medical procedure last week.

Fan-filmed video footage of AEROSMITH's August 16 performance in Gorge, Washington — featuring Jesse on the drums — can be seen below.

Jesse, who is not in the music business, contributed to the song "Lover Alot" on AEROSMITH's latest album, "Music From Another Dimension!"

A couple of weeks ago, Joey Kramer gave an interview to Smashing Interviews magazine in which he stated about how he prepares for the rigors of the touring lifestyle: "I'm in the gym every day on off days, and I just make sure I eat right and sleep right. That pretty much takes care of it. After doing it as many years as we've done it, it comes as second nature, so you just have to take care of what comes naturally."