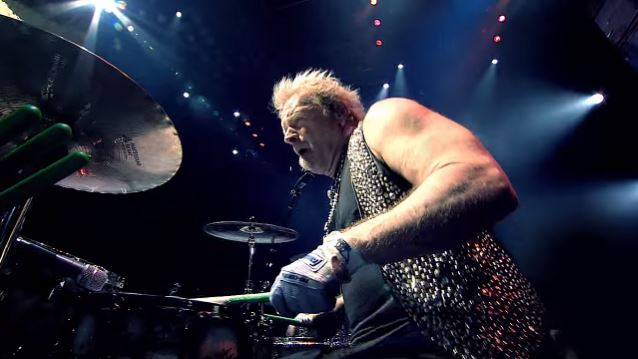 Joey Kramer has apparently distanced himself from his bandmates' recent chance meeting with President Barack Obama, saying that the surprise encounter "is not representative of AEROSMITH."

Tyler and Perry got to meet Obama Friday after the band's jet was delayed while returning to the U.S. after a South American tour. The plane was initially scheduled to leave an airport near Orlando before Air Force One shut down air traffic, but AEROSMITH ended up getting stuck on the runway. Obama was visiting Florida to campaign on behalf of Hillary Clinton.

"No better way to finish a beautiful South American tour," Tyler tweeted along with a photo of him and Perry sitting on Air Force One's stairs. "From Aero Force One to Air Force One... the best Welcome Home ever."

A couple of AEROSMITH's Twitter followers quickly took issue with the rocker's comment, tweeting that the drummer — who is also the founder of the Rockin' & Roastin' coffee brand — "[made] his politics clear" and adding: "I wonder what all his employees and customers think? #Aerosmith" This led Kramer to reply in a series of tweets: "I didn't make anything clear ! I'm not saying who I support! I don't support anyone speaking for me ! Everyone has their right to their opinion it's called democracy & I support that"

Kramer has in a recent weeks retweeted messages in support of Donald Trump and against President Obama's signature health-care law. In addition, Kramer and Tyler both attended the first GOP debate in August 2015 as the Republican presidential nominee's guests. Furthermore, Donald has been to AEROSMITH's concerts, Tyler is reportedly a registered Republican, and Perry has stated in previous interviews that he has been "a hardcore Republican" his whole life.

Despite being a tried-and-true Conservative, Perry told Vanyaland that meeting Obama was "pretty amazing."

Tyler last year threatened to sue Trump if he didn't stop using AEROSMITH's "Dream On" during campaign events. But the singer's attorney later said the issue was purely of copyright and intellectual property.

This is not representative of @Aerosmith ! https://t.co/wR43fvwTI8

Everyone has their right to their opinion it's called democracy & I support that https://t.co/sLlnDSNRWC

I didn't make anything clear ! I don't support anyone speaking for me ! https://t.co/cFV2sBNZGT

I'm not saying who I support! I don't support anyone speaking for me !