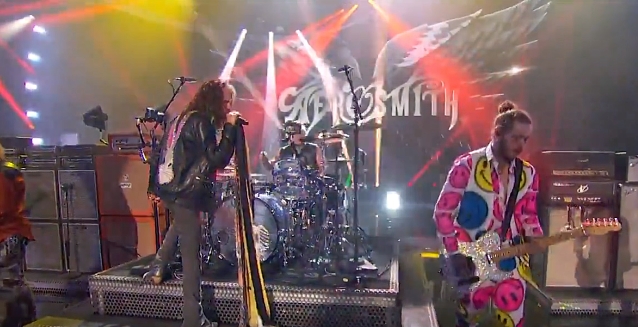 The 23-year-old rapper performed his hit "Rockstar", flanked by recent tourmate 21 Savage, before introducing AEROSMITH. Malone picked up a guitar and played along as AEROSMITH launched into its classic song "Dream On", then broke into "Toys In The Attic".

The residency, promoted by Live Nation and MGM Resorts International, features "never-seen-before visuals and audio from AEROSMITH recording sessions" via producer Giles Martin, who crafted the sound for THE BEATLES' "Love" Cirque Du Soleil show in Vegas. The band has also teamed with THX and L-Acoustics, who will deliver "the world’s first THX Certified live performance presented in L-ISA Immersive Hyperreal Sound."