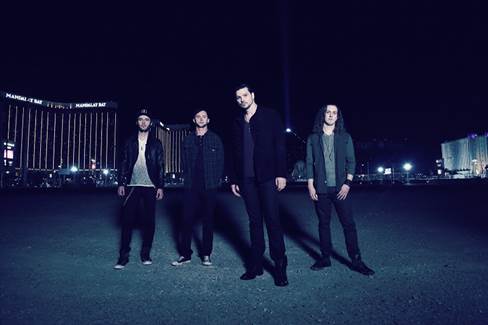 Las Vegas-based quartet ADELITAS WAY will release its third album, "Stuck", on July 29. The follow-up to 2011's "Home School Valedictorian" was recorded over the course of eight weeks in a cabin deep in the woods outside Nashville with Grammy-winning producer Nick Raskulinecz (ALICE IN CHAINS, FOO FIGHTERS, QUEENS OF THE STONE AGE). Frontman Rick DeJesus spoke with The Pulse Of Radio about the significance of the title. "I've seen through the eyes of so many people, from my friends to just my peers, myself, everyone — at some point, you know, they feel stuck in life, they feel like their feet are in the mud," he said. "You know, they feel like they're trying to pull out and trying to move forward and trying to grow, and just sometimes you can't."

DeJesus has said in recent interviews that ADELITAS WAY worked for a year and a half on "Stuck".

After releasing their dark and sexy video for the CD's first single, "Dog On A Leash", ADELITAS WAY is inviting fans to go behind the scenes of their video with personal moments of the band plus never before seen action. DeJesus explains the track is about "feeling like you need to ask permission to do what you want, like you're under the mercy of someone else, whether it's your boss or an overbearing girlfriend or boyfriend or whoever."

On September 10, ADELITAS WAY will embark on a tour with THE PRETTY RECKLESS.