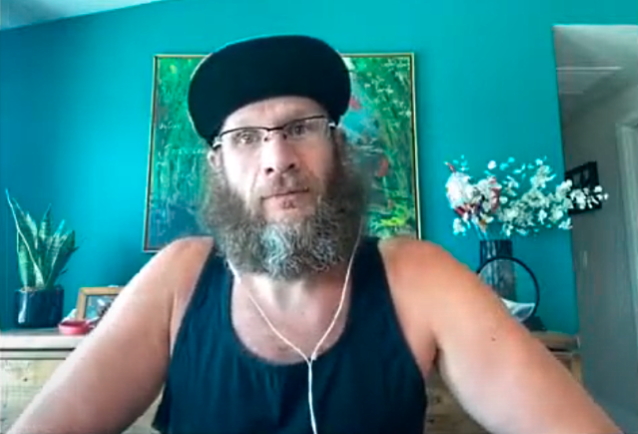 KILLSWITCH ENGAGE guitarist Adam Dutkiewicz spoke to the Metal Blade Live Series about the status of the new album from TIMES OF GRACE, his collaborative project with KILLSWITCH ENGAGE singer Jesse Leach.

He said (see video below): "I am really excited about that project, just because it's such a different creative outlet for me. There's some pretty mellow vibes on that record, for sure. It's definitely one of the darkest things I've ever written topically.

"We finished it up a little while ago, and we are now talking to labels about putting it out," he explained. "I've got a little gameplan, and hopefully we get enough tour support from a label so we can get out and do some tours with it.

"It's just really slow going right now with all of the talking to music industry folks and stuff like that, just because nothing is really moving right now," Adam said. "There's no real hurry, I guess. We'd love to get the music to people, obviously. But I guess when it's deemed the right time, we'll get it out as soon as possible.

Last month, Leach told the "BREWtally Speaking Podcast" that the new TIMES OF GRACE album is "leaps and bounds better [than 2011's 'The Hymn Of A Broken Man']. It's more creative, it's more genuine, I feel," he said. "I feel like there was definitely a bleed-in of KILLSWITCH influence on that first record, and how could there not be, with me and Adam working together. And I feel like this new record sort of pulls away from that and really sort of defines us and our sound as TIMES OF GRACE, where I listen back to 'Live In Love' [from the first TIMES OF GRACE album] and certain songs like that, and you can hear the KILLSWITCH influence. And that's cool, and fans, I'm sure, appreciated that, but I'm very happy to pull away from that and do something different for this new record."

"It's a mixed bag [of musical styles]," he said. "There's definitely some of that sort of bluesy [stuff] — definitely a lot of blues, I should say. But it comes in different forms. I'd say there's a mixture of a touch of some stoner vibes going on there. There's definitely a touch of, like, I guess the term would be 'post metal,' atmospheric metal — guitars with a lot of delay and space with big, heavy bass and slow-moving stuff. There's more rock and roll, more indie rock. And there's still traces of the metal that we're known for here and there."

TIMES OF GRACE originally entered Signature Sound studio in San Diego, California in late 2017 to begin recording material for its new LP. Sitting behind the drum kit during the sessions was Dan Gluszak, who previously played drums for TIMES OF GRACE on tour and has since been named an official member of the band.