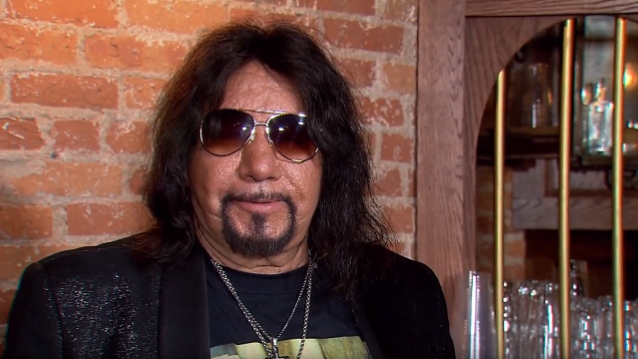 Ace Frehley will release "Origins Vol. 2", the sequel to his 2016 collection of cover songs that inspired the former KISS guitarist, in October via Entertainment One (eOne). The disc, which will feature guest appearances by Lita Ford (singing "Jumping Jack Flash") and CHEAP TRICK's Robin Zander (singing HUMBLE PIE's "30 Days In The Hole"), is currently being mixed.

Asked in a brand new interview with Long Island, New York's News 12 if he still gets chills when he performs live for his fans, Ace said (see video below): "It feels great. It's great to be adored and worshipped. I mean, I'm used to it, but I still enjoy it. I just turned 68 in April, but I'm still having a great time. I'm actually having more fun now than I did in my 50s. I don't know what the reason is. Sobriety might have something to do with it. The fact that I'm in better shape. I'm a lot more creative now. I've done five albums [in the past decade]. And 'Origins Vol. 2' is done. It's just being mixed. That'll be out in October. So there's a lot of stuff going on."

Frehley recently told The Weekender that "Origins Vol. 2" will once again feature a LED ZEPPELIN tune, "Good Times Bad Times". "I'm really excited about 'Origins Vol. 2'," he said. "It's surpassed my expectations. I got Lita Ford singing 'Jumping Jack Flash', and she's amazing. She came to my home and I coached her for two days with vocals and she just [expletive] killed it. I also have Robin Zander singing '30 Days In The Hole' by HUMBLE PIE. I really wanted to do the HUMBLE PIE song, but I just couldn't cut it, vocally, because [Steve] Marriott's just too good of a goddamn singer. I just couldn't do justice to his vocals. But I remembered that I had bumped into Robin Zander years ago at a meet-and-greet and he had mentioned to me that he'd like to sing on one of my upcoming records, so I remembered that and gave him a call. And he killed it as well. He sounds like a young Marriott."

In a 2016 interview with The Aquarian Weekly, Frehley admitted that doing the first covers album was "the record company's idea. To be honest with you, initially, I wasn't that excited about the project, because I had just come off the high of the success of 'Space Invader', which is all originals except for a cover of 'The Joker'," he said. "It was almost, like, 'Okay, I'm going to go through the motions and get this out of the way and then jump into the studio for my next real studio album.' But I've gotta tell ya, man, once I started the process and started remembering the groups that influenced me, narrowing down which songs I thought were going to be best for the record, and then started the recording process; I really started getting more excited about it."