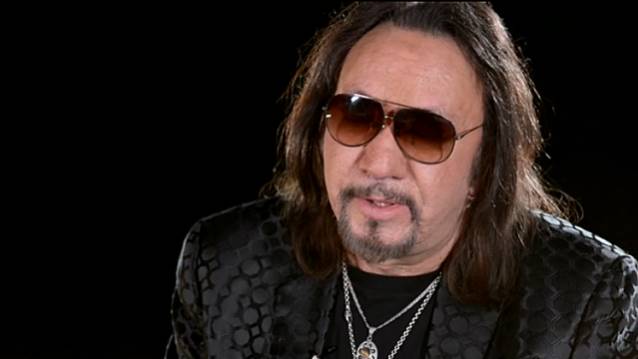 Original KISS guitarist Ace Frehley has yet to officially unleash his latest solo album, "Space Invader", but he is already thinking ahead to his next effort — a collection of covers and remixes. He tells Arena.com: "That will be out next year. I get suggestions, I come up with ideas, and I ask friends and associates about which songs to do. The songs are already written, so it is faster and easier for me to make that record. I will get guest stars like Lita Ford, Mike McCready from PEARL JAM, Slash. It is an easier record to make since I don't have much to do. The big stress is coming up with new guitar solos and vocals lines and melodies on new songs."

"['Space Invader'] is heavier than [2009's 'Anomaly']," Ace tells Arena.com. "I did it by design. My fans said that my last album could have been heavier and could have had more guitar work, so I kept that in mind when I made the record.

"I think there are a couple of songs like 'Toys' and 'Inside The Vortex' that are heavier than anything on 'Anomaly', my last record. The title track is heavy, too. Hopefully, people will love it. The biggest surprise was the title track. That was instrumental until we were mixing it.

"We were mixing it in L.A. but I went to my hotel and wrote lyrics and melody and threw it together in one day. I threw on a guitar solo and it came together.

"When I cut tracks, I cut guitar and drums, then throw a bass on, and I build onto that. I start out very elementary. Some songs were in the running to be instrumental, since one of my trademarks is having an instrumental song on my albums. I wasn't sure which would be the instrumental. It ended up being 'Starship'. But 'Past The Milky Way' and the title track were instrumental up until the last few weeks. I work good under pressure."

Asked what keeps him doing this, Ace says: "Playing live is still a big rush. Producing my own records is a great rush, especially when they turn out good. There are things on the horizon. I am up for a few movie scores, and been in touch with producers. No deals are signed yet, but there are discussions. I want to produce bands, and to share the wealth of information that I have learned. I would like to put a score to animation. I work with animation. There are lot of things I want to do."