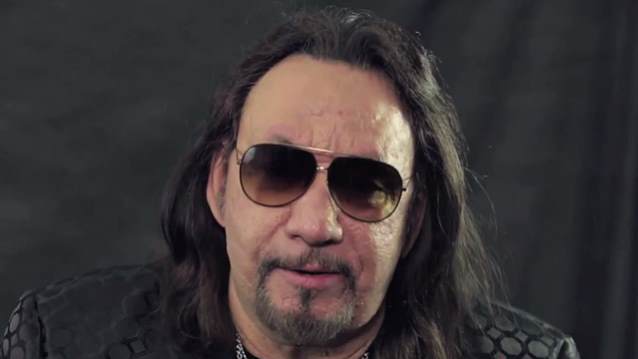 May The Rock Be With You recently conducted an interview with original KISS guitarist Ace Frehley. A couple of excerpts from the chat follow below.

May The Rock Be With You: ["Space Invader"] is your first solo album in five years. Why was now the right time to release new music?

Ace: I don't know. It took that long to make this happen… I started recording this one this past summer in July, but some of the songs I had written a few years back and was just an ongoing process. I signed a deal with eOne Music and it's been a very interesting process. I produced the record, I play almost all of the guitar work and the bass, Matt Starr played drums, my touring drummer, and we just had a few guest vocalists, pretty much, and that's about it.

May The Rock Be With You: So why was "Space Invader" the perfect name for this album and what does it represent to you personally?

Ace: After the holidays, we were deciding what to call the record and a lot of names were being thrown around and somebody came up with "Space Invader" and I thought that was great. Then we talked about the album cover and talked about me coming out of a flying saucer or a spaceship and a couple of the artists at eOne Music came up with some rough renderings, and I fooled around with it in Photoshop and then I was talking to Ken Gullic from eOne Music and we decided to give Ken Kelly a call because I've talked to Ken over the years about doing an album cover for me and he just jumped at the chance and boom, it was done a week later. [Laughs] Everything just kind of fell into place, like I said, the last two weeks of mixing I didn't have "Space Invader" or "Past The Milky Way" — there was no guitar solos, no vocals, no melody — and those two songs I think really wrap the whole package up into a nice bow because they're both space themes and they make the album come off as more of a concept record, I think.

May The Rock Be With You: I was also intrigued by your cover of "The Joker". Why was that a song you wanted to record for this album?

Ace: I don't know, because it wasn't my idea… It was, again, Ken Gullic's idea [laughs], and, to be honest with you, I was a little resistant, actually, because I didn't think it was heavy enough, but I had to think back to 1978 when Eddie Kramer asked me to do "New York Groove" and I was resistant to that too. [It] turned out to be my biggest hit, so I figured I'd get out of my own way this time around and take some direction. [Laughs] It couldn't hurt, you know. We cut that song in an afternoon. I actually tracked it my home studio with a drum track, and when it turned out as good as it did, I brought it into the studio and we cut it with real drums. It's a fun way to work. Working with Pro Tools is such a pleasure, because I was always such a computer guy and just the flexibility with editing and recording and being able to carry around stuff on a USB drive. It is the 21st century. [laughs]

May The Rock Be With You: Was [the Rock And Roll Hall Of Fame induction] a surreal event to be a part of?

Ace: It was a little surreal, but it was a pleasurable experience because there were just so many stars and celebrities on stage and off stage and everybody in the band was very gracious to each other and everybody was on their best behavior. You know, my only regret is that the fact that the four of us didn't perform. The Rock And Roll Hall Of Fame, they really pushed for it, and me and Peter [Criss, original KISS drummer] had agreed to do it, and then at the last minute Paul [Stanley] and Gene [Simmons] decided that they didn't want to perform with me and Peter, so you know, after forty years, they couldn't give the fans fifteen minutes… go figure.

May The Rock Be With You: After playing music for well over forty years now, is there anything left to do or that you want to do that you haven't already done?

Ace: Yeah, there's a lot. I want to do a score for a film, I want to start producing. I have so much knowledge and have worked with some of the greatest producers in the world. I'd like to share that with some younger bands, I'd like to bring some bands into the studio and bring them under my wing and teach them the stuff that I learned from the greats. People have been talking to me about a television show. I'd like to do an animation and put music to it because I do animation myself, computer animation. I'd like to maybe do a space animation and score. There's a lot of things I haven't done that I'd still like to achieve in my lifetime.