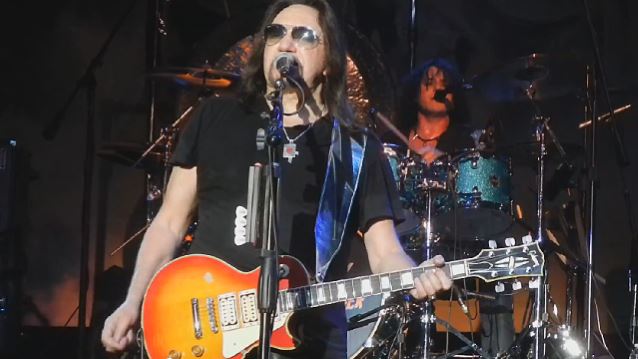 During a brand new interview with 100% Rock Magazine, former KISS guitarist Ace Frehley was asked if he would ever consider re-recording some of his old KISS songs. "Sure," he replied. "I mean, my next album for [label] eOne Music here in the States is going to be all covers and remakes, so, yeah, absolutely, I'm re-recording some KISS tracks. I believe I'm going to be doing 'Parasite'; I'm not sure which other ones, you know, and some covers that I've always wanted to do that I haven't done. So, that's going to be a fun record. I'm going to get a lot of different guest stars to play with me on these tracks. And it's going to be a much easier record than this last one ['Space Invader'] because I don't have to write solos, and I don't have to write lyrics because they're already set. So, that's going to be another fun record for me, and I'm looking forward to that, you know, start tracking it out in between tours and whatnot."

Frehley also spoke about the making of "Space Invader", his first solo album in five years, which sold around 19,000 copies in the United States in its first week of release to land at position No. 9 on The Billboard 200 chart.

"I still listen to the album and hear stuff that I don't even remember doing," he said. "I was having such a good time recording this record that a lot of it just came real easy. You know, the lyrics and the solos just kind of flowed out of me. I had a lot of fun doing it, and, you know, a lot of the reviews have said that it's a fun album, it's a feel-good record, and I'm really happy for that, because I was having fun, and it seems to have come through on the tracks, and that's a good feeling."

Some of the musicians that are expected to guest on Frehley's upcoming collection of covers and remakes are Lita Ford, Slash (GUNS N' ROSES) and Mike McCready (PEARL JAM).