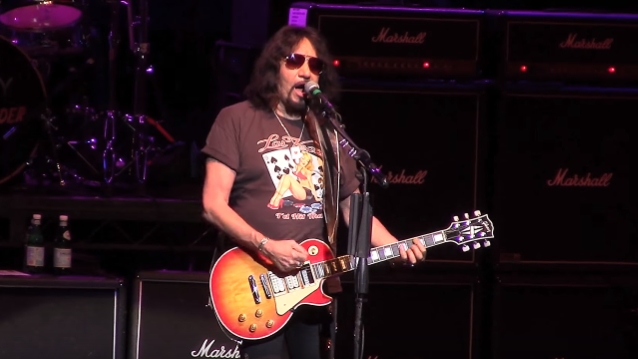 Former KISS guitarist Ace Frehley was recently interviewed by BUILD Series. The full conversation can be viewed below. A few excerpts follow (as transcribed by BLABBERMOUTH.NET):

On relocating to America's West Coast:

Ace: "New York's kind of a melting pot, and you really meet a lot of interesting people wherever you go — world nationalities, all religions, the whole scheme of things. Southern California, where I live now, I live in an isolated, gated community, so pretty much the only people I hang out with [are] whoever I invited over. Sometimes I hang out with my maid. [Laughs] But I just finished wiring up my recording studio there and [I've] actually started recording 'Origins, Vol. II'. I'm trying to figure out what guest stars I'm going to have on that, but there's a lot out there, so it shouldn't be a problem."

On the benefits of having a home studio:

Ace: "When I listen to the old records, it just doesn't have the production that the records have today. They're a little drier. When KISS started out, there was no such thing as a digital reverb. It was a spring reverb — it was actually just a spring in a box. The advances in technology and digital recording have really taken me to a different level and allowed me to produce records quicker, faster and more efficiently."

On the one song from new album "Spaceman" he didn't record there:

Ace: "Every song was recorded at my studio except for 'Quantum Flux', the instrumental. I went up to Los Angeles to work with my mixer, Warren Huart. I said to Warren, 'We have nine songs, and that's the amount of songs I want to put on the record, but none of them are instrumental.' He said, 'Every one of your studio albums has had an instrumental on it. You got any ideas?' I pulled out my guitar and played this instrumental idea I had written about eight years ago, and he said, 'That's great. Let's develop it.' He put the click track on and I started playing the parts, and then I doubled it and tripled it. Actually, Warren played a little lead guitar on it. It just all came together within a matter of three or four hours, and a couple days later, we had Matt Starr come in and play drums to the click track. Done. [Laughs]"

On covering "I Wanna Go Back", a 1984 song by Billy Satellite that became a major hit for Eddie Money in 1986:

Ace: "Me and [longtime fiancée] Rachael [Gordon] were laying in bed, just watching different YouTubes. Eddie Money's song came on. When I watched the video, I saw him returning to his old high school and driving through his old neighborhood, and I identified with that, because not that long ago, I had done a piece for Village Voice where they asked me to go up to the Bronx, show them the old high school, show them the places I used to hang out in the park. I identified with the whole thing, and the song's great, the melody's great and the lyrics are great, so I just had to Ace-ify it. Eddie Money's version is pretty much keyboards and sax, and my version is pretty much all layered guitars."

On new single "Rockin' With The Boys":

Ace: "I actually wrote that chorus in the seventies. It really was about KISS, because we were always on tour, and we always left the wives behind for the most part, so that was the sentiment behind that chorus. But I was never happy with the verse or the bridge, so when I was putting songs together for this record, I basically took that chorus and rewrote the verses and the bridge, and it came together all of a sudden. It took me a while — thirty years. [Laughs]"

On the origins of the new song "Bronx Boy":

Ace: "A friend of mine, Ronnie Mancuso, who co-wrote the song, he brought the song over to my house and it was called 'Green Tea'. [Laughs] It was, like, an anti-drug song, and I really didn't want to go there. I've been sober 12 years, [but] I don't want to preach to anybody. If you want to drink and take drugs, that's your business. I did it for God knows how long, but the reason I called my book 'No Regrets' is I felt I had to go through all that nonsense to get to where I am today, 12 years sober. So Ronnie brought over the song, and I said, 'I like the music but I hate the lyrics,' so pretty much we erased all the lyrics and I re-wrote all the lyrics. It's kind of autobiographical about growing up in the Bronx."

On the benefits of sobriety:

Ace: "I remember after I did [2009's] 'Anomaly', somebody said to me, 'You know, you haven't done an album in twenty years.' I said, 'Yeah, I know — I was drunk.' It makes you non-productive. Pot makes you lethargic — for me, anyway. Since I got sober, I've become much more creative, a much better producer, a much better songwriter, and I'm much more focused on what I'm doing. I show up on time; I go to bed early, get up early."

On producing his own albums:

Ace: "I call the shots. When I worked with KISS, it was like fighting with four guys and a producer, and now that I produce my own records, I have complete freedom."

"Spaceman" was released on October 19 via eOne.