Prior to an in-store appearance in New York City on October 19, former KISS guitarist Ace Frehley spoke with Dave Stutts of Sam Ash. The full conversation can be viewed below. A few excerpts follow (as transcribed by BLABBERMOUTH.NET).

On the current artists that inspire him:

On whether he still practices playing guitar:

On his home studio:

Ace: "I have a home studio with Pro Tools set up, so all I do is hit a button and throw out an idea. I do a lot of the engineering on my albums myself, like 'Fire And Water', the track that Paul Stanley sang on 'Origins, Vol. 1'. I was the one that engineered that guitar solo, and the one on the record from beginning to end, there's no edit on that. I don't like recording with plug-ins. I use old mics, old pre-amps, old amplifiers, vintage guitars. I got really angry because I was working with an engineer who was... the sound I was hearing was a plug-in, and somehow, he had installed the plug-in into my system, but after he left my house, it crapped out. I'm trying to listen to the guitar track I did, which sounded great with the plug-in, and it was all clean. I'm completely against recording that way. I want to record and print what I'm hearing, not rely on a plug-in. The less plug-ins I use, to me, the more vintage it sounds."

On watching and learning:

Ace: "I've learned so many miking techniques from guys like [former KISS collaborators] Eddie Kramer and Bob Ezrin. I use a lot of that stuff whenever I record... I'm still experimenting to this day. Every time I do a record, I try something different and come up with some different combination of miking. Sometimes, I'll put a mic in the hallway and get natural ambiance, which always sounds better to me than digital reverb."

On a particularly bad show he remembers:

Ace: "I did gig with a band when I was, like, 20, in Patterson, New Jersey. It was a mob joint, and I kind of drank too much, so by the end of the night, I was playing too loud, and the owner kept complaining, and I pretty much ignored him. At the end of the night, he didn't want to pay us the full amount that he promised us, so the leader of the band who hired me because his guitar player was sick, he said, 'Well, if you want that extra money, you're going to have to go ask him yourself.' I went over and said, 'Where's the extra sixty bucks?' The next thing you know, he gives me a shot across the bar. I didn't know he was a professional boxer at one point in time. He fractured my cheekbone. That wasn't my favorite gig."

Frehley — whose new solo album, "Spaceman", was released on October 19 via eOne — first left KISS in 1982. He rejoined in 1996 and parted ways with the band once again in 2002, soon after the conclusion of their first "farewell tour." 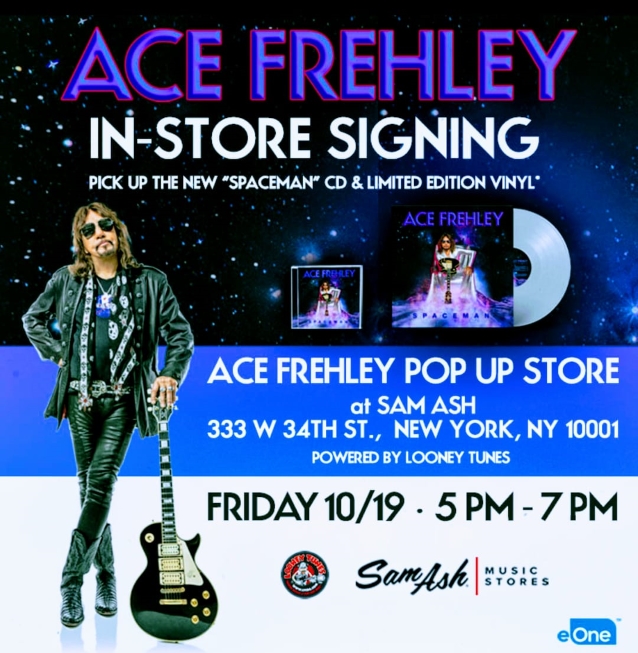