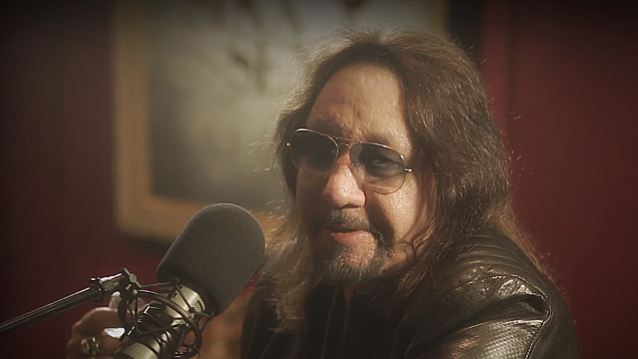 Veteran radio personality Jenn Marino, who in 2014 joined MÖTLEY CRÜE and SIXX:A.M. bassist Nikki Sixx as co-host of "Sixx Sense With Nikki Sixx" and "The Side Show Countdown With Nikki Sixx", recently conducted an interview with original KISS guitarist Ace Frehley. You can now watch the chat below.

Asked about some of KISS bassist/vocalist Gene Simmons's recent controversial comments, including his opinion on the tragic deaths of great music icon Prince, Frehley said: "I think he's coming down with Tourette's [syndrome]. [Laughs] He can't help himself sometimes."

He continued: "But you've gotta love that guy. I mean, he saved my life twice. I was in the hospital in 2005 out here [in Los Angeles], and I was leaving the hospital, and I was supposed to leave in a wheelchair. Most people [when they leave the hospital], they wheel you down to the lobby and then you get in a limo. He picked me up and carried me all the way downstairs. He didn't want me to be in a wheelchair. I mean, how sweet of a guy is that?"

Frehley added: "Gene comes off very abrasive and like a money-grubbing guy, but, you know, there's another side to Gene. There's that sweet, sensitive guy that you don't always see. But it's there."

Asked if he ever gets used to Gene's outspoken and controversial public personality, Ace said: "I worked with the guy for years, on and off, so I'm used to anything Gene says and does. But as of late, he's been a little more outspoken than in the past."