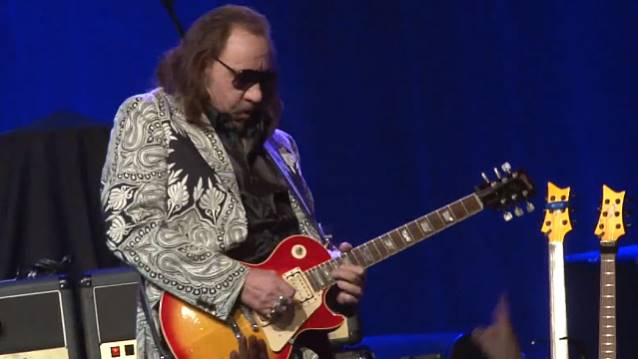 Original KISS guitarist Ace Frehley is still unsure if he will embark on a major tour in support of his recently released solo album, "Space Invader", saying that his schedule will be dictated by simple economics.

During an interview for VH1 Classic "That Metal Show" co-host Eddie Trunk's podcast, "Eddie Trunk Podcast", Ace was asked how hard he plans to hit the road to promote his new CD, which sold around 19,000 copies in the United States in its first week of release to land at position No. 9 on The Billboard 200 chart.

"It all depends on what the promoters are willing to pay," Ace said. "I like to pay my people well. If I can't get enough money on the road to pay everybody and turn a nice profit, I'm not gonna do a major tour, I'll do selected shows. It all depends. And if the album takes off the way I hope it will, it'll probably be different."

According to VegasNews.com, drummer Scot Coogan will return to Frehley's band this fall, along with THE CULT's Chris Wyse, to tour in support of "Space Invader".

Coogan played with Frehley for five years until 2012 when he left Ace's band to focus on other projects. He has since toured and recorded with LYNCH MOB and sat behind the kit for Lita Ford on the 2012 "Rock Of Ages" tour with DEF LEPPARD and POISON.