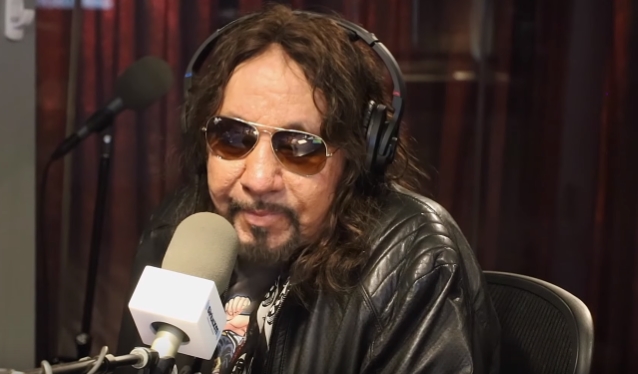 Former KISS guitarist Ace Frehley spoke to SiriusXM's "Jim And Sam" about his decision to part ways with the solo band that has backed him on his most recent tours: Richie Scarlet on guitar, Chris Wyse on bass and Scot Coogan. His new group now consists of musicians who backed him and KISS bassist/vocalist Gene Simmons on an Australian tour this past summer: Philip Shouse on guitar/vocals, Ryan Cook on guitar/vocals, Jeremy Asbrock on guitar/vocals, and Christopher Williams on drums. After the Aussie dates, Shouse, Cook, Asbrock and Williams accompanied Frehley on a Japanese trek. Shouse switched from guitar to bass for Frehley's show.

Comparing his new badmates to his old group, Frehley said: "They're better in the sense that they're more hungry, everyone sings lead, they really nail all the parts musically, and they pick up the phone."

Asked if his previous musicians didn't answer his phone calls, Ace said: "A lot of times, no."

Speaking about how his former bandmates took the news that they were being replaced, Ace said: "It wasn't a big deal with Chris Wyse, because he's been working with the HOLLYWOOD VAMPIRES, playing bass, and he's also been doing some solo shows with Joe Perry. He's one of the most sought-out bass players in Los Angeles, so he was pretty cool about it. My drummer, Scot Coogan, he didn't take it too well."

Recalling the conversation with Coogan during which he informed the drummer that he was being relieved of his duties, Frehley said: "I told him I was moving on with Gene's cover band and 'I'm not gonna need you anymore at this juncture.' He goes, 'Ace, c'mon! What are you talking about?' He goes I'm his rock star. 'You're losing a rock star,' he says. Okay — whatever you say. Then he's hitting me up for money."

According to Ace, the "hardest" person for him to fire was Scarlet "because his wife [Joann] just passed away. And I knew she didn't have very much time to live, because she had Lou Gehrig's Disease [ALS] and there's no cure," Frehley said. "So I was procrastinating for a week not to call him. Finally, I got enough guts up to call him, and he was so drained, because he had been at the hospital every day and so on and so forth. After I told him, he just couldn't grasp it with everything else surrounding his… what he was going through. So he pretty much hung up on me. But I've known Richie the longest — 35 years — so I let a day or two go by and I called him back one evening a couple of days ago, and we made up. He apologized for hanging up for me. We discussed and reminisced about old times. He reminded me that I dated his wife before he did. [Laughs]"

Frehley went on to describe Joann as "a wonderful woman" who "really enjoyed life," adding that "her and Richie had so much fun together and had met so many people."

After his second conversation with Scarlet, Frehley says Richie told him "Ace, whatever's best for you, I want you to go ahead and do it." Ace also revealed that he was covering half of Joann's funeral costs and was on his way to speak at the service a few hours after the interview.

Asked if there was any way that he could have kept some of the musicians from his previous band or if it was an "all-or-nothing" type of scenario, Frehley said: "Well, these guys [Shouse, Cook, Asbrock and Williams] from Nashville, they're a unit, and it's all or nothing. And they're terrific. I remember doing '2000 Man' in Tokyo. And with my old band, they were great live and they were great musicians in their own right, but the vocals weren't always there, because they're not all lead singers. This new band is all lead singers, so all of sudden, I'm playing '2000 Man', and when the band kicks in, I'm hearing the three-part harmony that I haven't heard since I was with KISS."

According to Ace, the harmony vocals he wanted to hear from his solo group never materialized until he started playing with his current lineup. "It just wasn't there," he said. "Chris Wyse, I love him — he's one of the greatest bass players in the world — but he's really not a lead singer. Scotty is the only really lead singer."

Asked if he is good at firing people, Frehley said: "No. I hate it. I don't actually like being a boss. I remember the days I was in KISS where I didn't have to get involved with the business that often. [Paul Stanley and Gene] were more business-orientated, where me and Peter [Criss, drums] were more party-orientated. I didn't fire anybody [while I was in KISS], I don't think."

Frehley's new solo album, "Spaceman", will be released on October 19 via eOne.