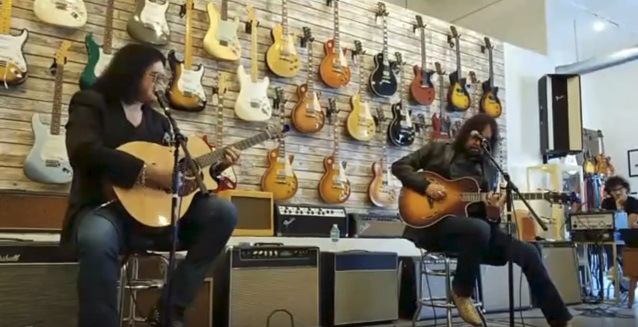 At the Miami event, Gene met with each and every fan who came out, performed some of the tracks from "The Vault" and explained how they were written.

According to Gene, he will "take a year off and literally travel around the world and hand-deliver the box set to whoever gets it. And the reason for that is… I'm really doing this for myself. Imagine you dreamed as a young kid you'd be a broadcaster and you finally get there and the people that allowed you to get there are the fans, right? The people who listen to you every day. So, because you're so enormously rich and powerful, what you wanna do is you wanna put on the biggest party of all time, but if you're the only person there, it's not much of a party. So my experience is, I'm on stage, but there's a separation between the stage and the fans; there are security guards and I can't get close to them. And when you go through a hotel lobby or some place, there's always a security guard who's keeping the folks away. So what I'm gonna do is I'm gonna change all that and I'm gonna go myself, pay for my own flights, hotels, security, insurance — I'll do that — and I'm gonna be going around the world, yeah, even to New Zealand, and hand-delivering the box sets."