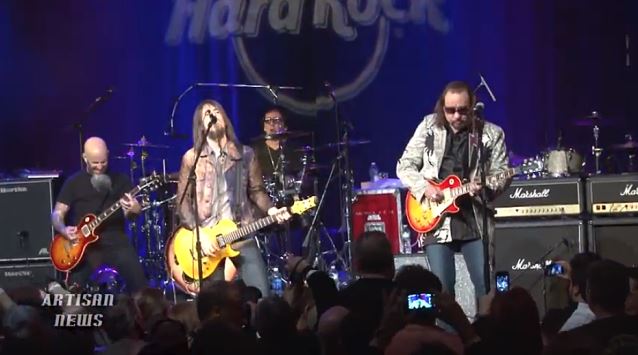 Original KISS members Ace Frehley (guitar) and Peter Criss (drums) reunited on stage for the first time in 13 years this past Wednesday night (October 23) during the all-star jam at the 30th-anniversary party for VH1 Classic "That Metal Show" co-host Eddie Trunk's radio show at the Hard Rock Café in New York City. Drummer Mike Portnoy (THE WINERY DOGS, DREAM THEATER) served as the musical director for the event, which featured additional performances by members of GUNS N' ROSES, ANTHRAX, ACCEPT, TNT, TWISTED SISTER and OVERKILL, among others.

Frehley and Criss, along with several other members of the backing band — including GNR's Ron "Bumblefoot" Thal and ANTHRAX's Scott Ian and Frank Bello — played KISS' "Love Her All I Can" and "Rock and Roll All Nite". You can watch video of their appearance below (courtesy of Artisan News). Also available is footage of the "Rock and Roll All Nite" pre-show soundcheck.

According to The Pulse Of Radio, Gene Simmons has no interest in playing with Frehley and Criss — meaning that things might get tense if the band gets indicted into the 2014 class of the Rock And Roll Hall Of Fame. KISS now tours with guitarist Tommy Thayer dressed in Frehley's makeup and drummer Eric Singer dressed as Criss in an effort to replicate the band's original lineup. Simmons says that both co-founders have repeatedly blown their shot to share the stage with him and Paul Stanley, with Ultimate Guitar reporting that Simmons told Radio.com: "No, how many chances in life do you get? When you stick your hand in the fire, you get burned the first time. Fire and nature doesn't care if you're a good guy or a bad guy. Both of these guys had three chances to be in the band and three times they fucked it up. They were every bit as important as we were at the formation of the band and they would have been the ruin of the band had they continued in it. . . When you have a cancer in your system, it's best to cut it out as fast as you can. It used to be a part of your body, then it turned into cancer, so you gotta cut it out."

Simmons went on to say: "I believe that both Ace and Peter are happier now. They are healthier, they look fine. When they were in the band they were both on junk, or crack, or alcohol. Clearly not a healthy place for them. They belong doing autograph shows in clubs — they're happier."

The Pulse Of Radio asked Paul Stanley what members of KISS should be inducted into the Rock And Roll Hall Of Fame should the band finally be voted in. "Well, that's a really good question," he replied. "We would — y'know, obviously would be something to think about if and when it happened. There've been a lot of people who have been a part of this — some longer than others, some adding less than others, and some who deserve recognition more than others. So, it would be something to think about."