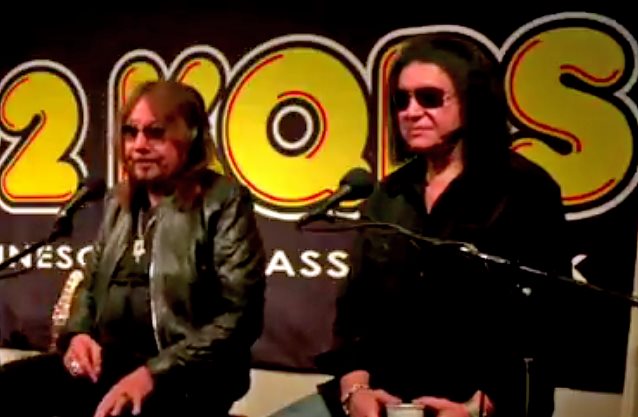 KISS legends Gene Simmons and Ace Frehley were interviewed together for the first time in many years on September 20 prior to performing at a charity concert at CHS Field in St. Paul, Minnesota. They were joined at the studios of the KQRS 92.5 FM radio station by CHEAP TRICK guitarist Rick Nielsen and former EAGLES lead guitarist Don Felder.

The interview marked Simmons and Frehley's first joint public appearance since KISS's Rock And Roll Hall Of Fame induction in 2014. Ace and Peter Criss did not perform at the Hall Of Fame — the organizers wanted the original quartet only to play, while Simmons and Paul Stanley insisted on the current lineup, which also includes guitarist Tommy Thayer and drummer Eric Singer, performing as well. In the end, nobody won that battle. Ace later predicted that Simmons and Stanley would "regret" the decision not to play with the original band at the event.

Speaking to StarTribune shortly after the KQRS interview, Simmons said that anyone asking about any of the past friction between him and Frehley was "delusional."

Frehley also downplayed the infighting between him and his former bandmates, saying: "[Gene] was over at my house about six weeks ago, and we wrote two songs for my new album. He came to my show when I performed in Los Angeles about six months ago. Whenever I get together with Gene — or last year I got together and did a video with Paul — it's just a lot of fun."

Simmons and Frehley performed together onstage for the first time in over sixteen years at The Children Matter benefit concert to support the victims of Hurricane Harvey. The event saw the two musicians sharing vocal duties for three classic KISS songs: "Parasite" from the 1974 album "Hotter Than Hell"; "Cold Gin" from KISS's self-titled 1974 debut; and "Shock Me" from 1977's "Love Gun".