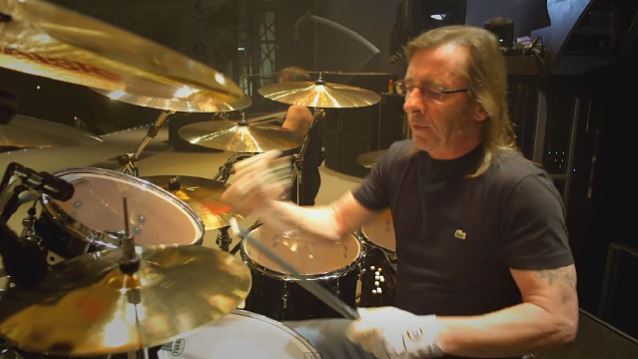 AC/DC drummer Phil Rudd (pictured) sat out the video shoot for the band's two new singles, "Play Ball" and "Rock Or Bust", on October 3 and October 4 in London, England. He was replaced during the flming by Bob Richards, who had previously played with SHOGUN and IRON MAIDEN guitarist Adrian Smith. AC/DC singer Brian Johnson reportedly told some of the fans attending the shoot that Rudd was unable to participate in the filming due to an undisclosed "family emergency" although this has not yet been corroborated by an official source.

A report on the video shoot by Bob Fiddaman can be found at this location.

AC/DC guitarist Malcolm Young's family last month released a statement confirming reports that he is afflicted with dementia. The statement issued to People said, "Malcolm is suffering from dementia and the family thanks you for respecting their privacy."

The 61-year-old Malcolm reportedly suffered a stroke earlier this year.

The group had previously announced in April that Young would be stepping down and that it would be recording a new record without him.

AC/DC announced a December 2 release date for its new album, "Rock Or Bust", last month, also revealing that Malcolm would not return to the band.

Malcolm and Angus Young's nephew, Stevie Young, played rhythm guitar on "Rock Or Bust" and will be part of the lineup for the band's 2015 world tour.