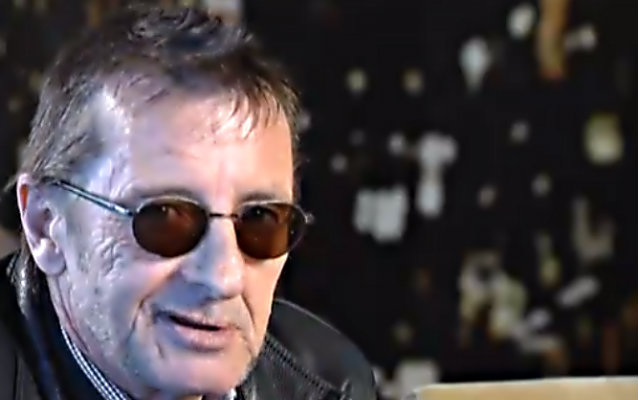 AC/DC drummer Phil Rudd recently spoke to Libel Music about his debut solo album, "Head Job", which was released at the end of last month via Universal Music Australia. The songs on the CD were penned primarily by Rudd with the assistance of Allan Badger and Geoffrey Martin — musicians Phil met on the local scene in New Zealand, which he says "turned out to be a great musical partnership." "Badge" and Martin also perform vocals, guitars and bass on the album, with Rudd sitting in the producer's seat. The tracks came together over a period of time recorded at several locations including the studio that Rudd built himself not far from his restaurant Phil's Place in Tauranga, New Zealand.

"I couldn't be bloody happier [with the record], to tell you the truth," Phil told Libel Music. "I'm so proud of the album, everything I had to do with it. The guys played really well on it, it's just too good. Really great, mate… I'm pretty happy with the drum sound.

"My four favorite tracks are the ones we did at (now-defunct Auckland recording studio) York St. The engineers there — fuck, the drum sounds awesome. I can't believe it… Guess who mixed it. [

"Usually when you record an album, they start with the drum sound and bury it with all the other crap. It sounds big."

Asked to name his favorite songs on "Head Job", Rudd said: "It's quite difficult, because they're all pretty good. It's quite unusual for a whole album to be good. It might be crap — I don't know. From the response we've had, it's not that way. I do like 'When I Get My Hands On You' because of the drum sound. That's a granddad playing those drums, bro. You'd hardly ever get a fucking granddad playing that type of sound. I'm really impressed with myself. [Laughs] I'm old but not cold, if you know what I'm saying.

"I think it's a fabulous album — I just hope I'm not wrong... because I've been wrong before."