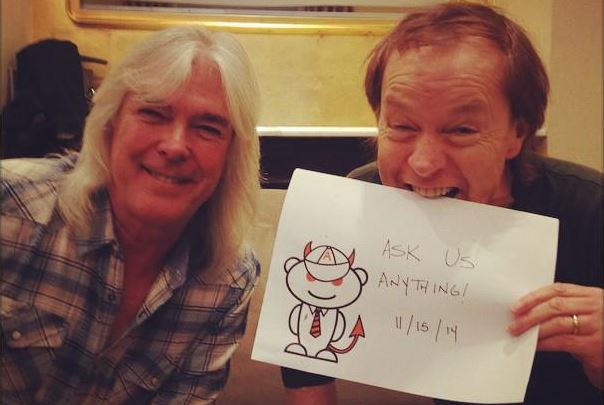 AC/DC guitarist Angus Young and bassist Cliff Williams took part in a Reddit Ask Me Anything session yesterday (Saturday, November 15). You can now check it out at this location. A couple of excerpts follow below.

Q: What is going to happen to [AC/DC drummer] Phil [Rudd, who is facing threatening-to-kill charges in New Zealand]? Will he be touring with you on the "Rock Or Bust" tour?

Cliff: "Phil has to get himself well. That may take some time."

Angus: "It's a bit of a question now. But the band is committed to going forward and touring."

Q: Angus, is it true that while you recorded "Let There be Rock", your amp caught on fire and some of the buzz from the burning speaker ended up on the final recording? Always thought that was a cool story.

Angus: "Yes, it was on fire and I had to keep playing until the end. Because my brother was in the control room and yelling out 'Keep going!' so I had to keep going until the thing kind of went into meltdown. And on this album, 'Rock Or Bust', we had the same thing during the track — one of them, my amp just went on fire. And I didn't even know! I thought it was a cigarette going. But [producer] Brendan [O'Brien] was shouting out…"

Q: Angus, I've just read you would still possess your very first SG [guitar]. Why don't you use it any longer?

Angus: "I do use it! I do use it on the studio; it's on every album. It's my favorite guitar, the first Gibson SG that I owned. Me and that guitar go a LONG way back. Very nice of you to know that."

Q: There are a few older photos of you drinking milk. Is it still your drink of choice?

Angus: "Well, I did used to drink a lot of milk, yes. And I don't know why, really, at the time. My body just seemed to say I had to drink that milk. And I used to have gallons of the stuff. Both chocolate — I was a big fan of chocolate milk, when it was first invented. That sounds strange too, but when it first became commercial, I made my own — and I used to drink milk AND eat a lot of chocolate bars. The only one that had a problem with it was my dentist."

Q: What modern bands do you guys believe you've had an influence on?

Angus: "Modern bands? AIRBOURNE, obviously. I think there was a female band here, the DONNAS. I heard that they're influenced by us, I know there's a few other ones. Either here or Canada or somewhere, they were called DANKO [JONES]. And Alice Cooper told me yesterday, his band... THE STRYPES... he said to check THE STRYPES out. They had an authentic '60s, '70s sound, whatever that is. So we do know some things."

Cliff: "I think that covered it, the ones we know, I know."

"Rock Or Bust" will be released on December 2.