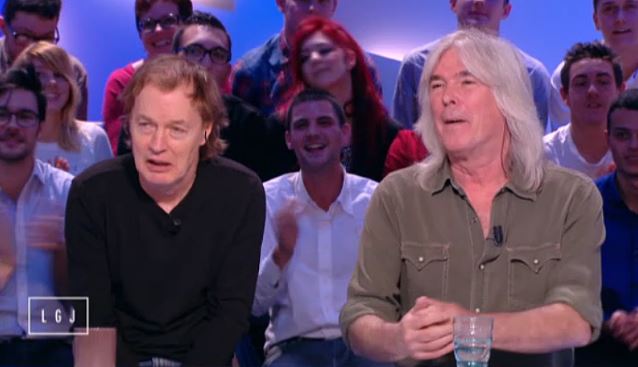 AC/DC members Angus Young (guitar) and Cliff Williams (bass) were recently interviewed on "Le Grand Journal", a French nightly news and talk show airing every weekday evening on Canal+. You can now watch video footage of their appearance below.

AC/DC's 16th studio album, "Rock Or Bust", arrived in stores on Tuesday (December 2), following perhaps the toughest stretch of time in the band's 40-year history since the death of singer Bon Scott in 1980. First, founding guitarist Malcolm Young was forced to retire from the group due to the onset of dementia, with the band recruiting nephew Stevie Young to play in his place. Then drummer Phil Rudd put his own future with the band in doubt, showing up late for the recording sessions, missing a video and photo shoot entirely, and finally being arrested on charges of murder-for-hire, threatening to kill and drug possession. Rudd showed up for a court hearing last week but his status with the band remains unclear.

Although Malcolm did not play on "Rock Or Bust", all the songs are credited to him and his brother and co-founder, guitarist Angus Young. Angus told The Pulse Of Radio that he and Malcolm stockpiled music over the years. "Yeah, there's a lot of ideas we've had all over the years," he said. "The two of us always done this. There was always riffs that we had that were good riffs and we never used, and that was the same for every album. We always borrowed bits and pieces from the past. As Malcolm said, sometimes you can be sitting there scratching your head for days, trying to come up with something new — he said we might as well just look in what we've done before and go, 'Well, this might work.'"

Meanwhile, Angus recently opened up about his relationship with Malcolm, revealing that Malcolm’s dementia has enhanced their relationship.

Angus told Bang Showbiz, "Did it make us closer? Yes, for sure. Even when he was ill. When touring, he didn't have great days. So I'd sit with him and we'd talk. He'd surprise me, by talking about things such as how we should do some open-air shows. But then he's always been our leader and it was just good to have that feedback."

The Sydney Morning Herald reported that Malcolm, who is now receiving full-time care in a nursing home in Sydney, suffered from a complete loss of short-term memory.

AC/DC will launch a world tour in support of the record in 2015.