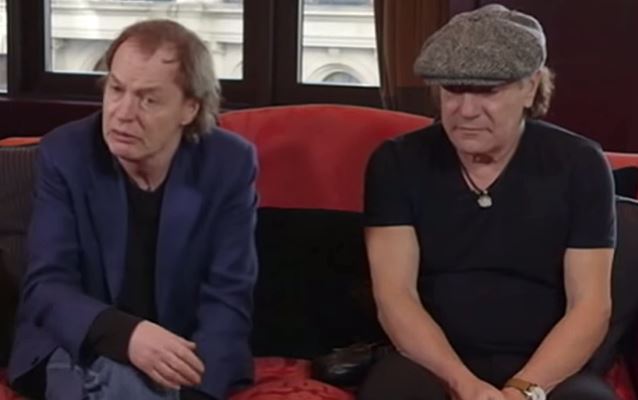 AC/DC guitarist Angus Young and singer Brian Johnson were interviewed on the November 12 edition of the German TV show "Leute Heute" on the ZDF channel. You can now watch the German-language report below.

Angus and bassist Cliff Williams addressed the legal problems of drummer Phil Rudd in a new interview with USA Today, saying that the drummer is "not the Phil we've known from the past." Rudd was arrested on November 6 and charged with attempting to arrange a murder, threatening to kill and possession of meth and marijuana. Although the first charge was dropped, he still faces seven years behind bars for the others.

Williams said that getting Rudd to the studio for the recording sessions of the new AC/DC album, "Rock Or Bust", was "tough," with Young adding, "It put us in a difficult situation. It put us in a spot where we couldn't move forward. Does the guy show up? Is he reliable to do his job in good shape? We've always been a solid, reliable unit."

Young continued, "Phil created his own situation. It's a hard thing to say about the guy. He's a great drummer, and he's done a lot of stuff for us. But he seems to have let himself go. He's not the Phil we've known from the past."

The guitarist did not want to delve into whether drugs were involved in Rudd's seeming decline, adding, "I don't know the exact situation… I can only say, from our perspective, that the guy needs to sort himself out."

AC/DC issued a statement on Rudd's arrest, saying that this absence will not affect the December 2 release of "Rock Or Bust" and the band's upcoming tour.

Drummer Bob Richards sat behind the kit for the filming of the videos for singles "Play Ball" and the title track, but it is not known whether he will join the band on tour if Rudd cannot.