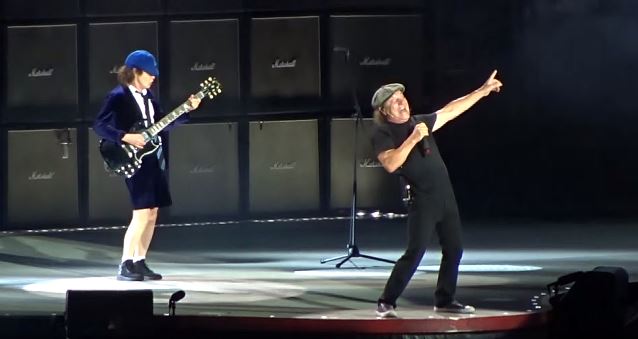 According to Billboard.com, AC/DC's three Midwestern U.S. arena shows in Fargo, North Dakota; St. Paul, Minnesota; and Chicago, Illinois were seen by 47,939 fans, generating $5.7 million in box office revenue and placing the trek at No. 1 on the weekly "Hot Tours" list of top-grossing tours.

The February 11 concert in Fargo was the best-attended show of the three, with 19,308 tickets sold, while the February 17 performance at Chicago's United Center was seen by only 13,773 fans. It should be noted, however, that the veteran rockers also played Chicago last fall when a sellout crowd of 29,732 packed the city's Wrigley Field.

AC/DC last month filed a lawsuit to get a judge's order that it can use to direct federal marshals, and authorize local and state police and agents hired by the company to seize bootleg T-shirts and similar items during the band's current U.S. tour.

AC/DC's latest leg of U.S. dates kicked off on February 2 in Tacoma, Washington and will conclude April 4 at Madison Square Garden in New York City.

Guitarist Angus Young told The Pulse Of Radio a while back that AC/DC has never changed its approach to its live shows even as it's played bigger and bigger venues. "Somebody once had said, 'You know, people know what they like and like what they know,'" he said. "In the beginning, we were a, you know, just a rock 'n' roll band, and, you know, when you would play in bars and clubs and stuff, you know, this is what the audience was coming to hear you for."

AC/DC's sixteenth studio album, "Rock Or Bust", has sold more than 560,000 copies since debuting at No. 3 on the Billboard album chart back in December 2014.

One-time AC/DC drummer Chris Slade officially joined the band's lineup for its performance at the Grammy Awards telecast. Slade is also behind the kit for the group's current world tour.