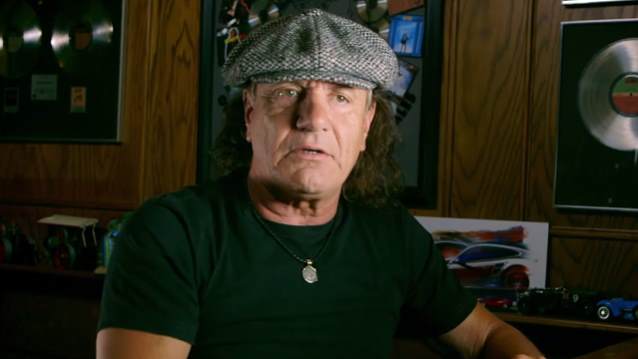 According to Interactive Jaguar Blog, AC/DC singer Brian Johnson has added a new Jaguar F-Type Project 7 — Jaguar's fastest and most powerful production model to date — to his car collection. He said: "I love it. It's a proper supercar, and boy, oh boy, does it have some grunt to it. While it's blisteringly fast, I feel so safe in it. I love the steering, the handling, and those carbon ceramic brakes are amazing. The discs are as big as the wheels on my racing Mini. Just listen to that noise from the exhaust. Who needs a stereo when you have a soundtrack like this?"

Asked what it was about the F-Type Project 7 that appealed to him, Johnson said: "I think it's because it pays homage to one of my favorite Jaguar cars of all time, the Le Mans-winning D-type. You see, the D in that lovely fairing behind the driver's seat. It's also a pretty rare car; they've only built 250, with just 50 of those coming to the States. I literally had to beg them to buy one. Of course they asked me what color I wanted. I told them: Is there any other color than British Racing Green?"

Johnson previously stated about his love of cars: "A few years ago, AC/DC did a gig at the Nürburgring racetrack in Germany. There were 119,000 people gathered on the hills and stands. It was wonderful to stand up there with the band, but when I was on stage singing, I thought, I wish I could drive this track.

"If someone had asked me when I was a teenager whether I wanted to become a top driver or the lead singer with one of the world's biggest rock 'n' roll bands, I'd have said driver. I always imagined myself as Stirling Moss or Graham Hill. Luckily, the music worked out and has meant I can live the dream of racing.

"I am often asked to compare the two. When you are strapped into a car hurtling towards the first bend, the adrenaline has to be greater than it is when you're on stage. Maybe that's because the risk of hurting yourself or worse on stage is not the same as in motor racing.

"I was once racing a Porsche when the engine of the car in front blew up. Driving through a wall of smoke, with oil all over the windscreen, I couldn't see a thing. At times like that you wonder if you will emerge alive. Now I count myself as a lucky man in that I get the opportunity both to sing and to drive."