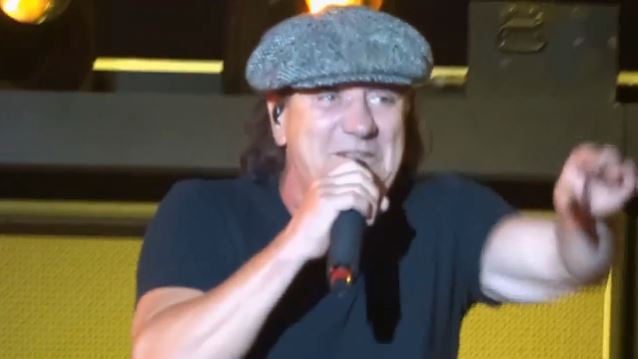 AC/DC played its first full North American show in over five years on Friday (April 10) when the band headlined the first of two shows at the Coachella Valley Music And Arts Festival in Indio, California. Aside from two songs performed at the Grammy Awards in February, this also marked the first full appearance by the new AC/DC lineup, in which guitarist Stevie Young has replaced Malcolm Young and drummer Chris Slade has stepped in for Phil Rudd.

AC/DC's 20-song set kicked off with "Hell Ain't A Bad Place To Be", featured three songs from the band's latest album, "Rock Or Bust" album (the title track, first single "Play Ball", and "Baptism By Fire"), and ended with the band's staple show closer, "For Those About To Rock".

Vocalist Brian Johnson told the Los Angeles Times that he received words of support and encouragement earlier this week from Paul McCartney, who played Coachella in 2009. Johnson explained, "I ran into him downstairs [at the Four Seasons hotel in Los Angeles] this (past Tuesday) morning. He goes, 'Brian, you get on that stage and I'm telling you, you see all these kids looking for the hip-hop acts. Then they see you, and they're like, 'Who's he? Oh, yeah — me dad talks of him.' But he said it's great because you're doing your thing, and eventually all the kids go, 'He's cool, this dude!'"

Johnson added, "It kind of takes you right back to the start, when you had to win over an audience. I'm excited."

Johnson told The Pulse Of Radio a while back that the band was confident its hardcore fans will always be there. "Yes, I would hope they would come back and see you again," he said. "I think we've put down a good foundation. We never take anything for granted, you know. How can you? Times change, things change, so you've just got to keep doing what you're doing, basically, and just hope that they'll come back for more."

Coachella, which takes place on both April 10-12 and April 17-19, is also headlined by Drake and Jack White in addition to AC/DC.

This year's headliners will possibly earn between $750,000 and $2 million each, according to Billboard.com.

AC/DC's sixteenth studio album, "Rock Or Bust", has sold around 513,000 copies since debuting at No. 3 on the Billboard album chart back in December.

It's the band's first album without Malcolm, who is suffering from dementia. Rudd is out after being arrested last November on charges of threatening to kill and possession of methamphetamine and cannabis.

"@coachella: You shook me all night long pic.twitter.com/cWptwULf1p"IM SO AAD I WANT 2 GO TO COACHELLA JUSY FOR AC/DC :-(((((