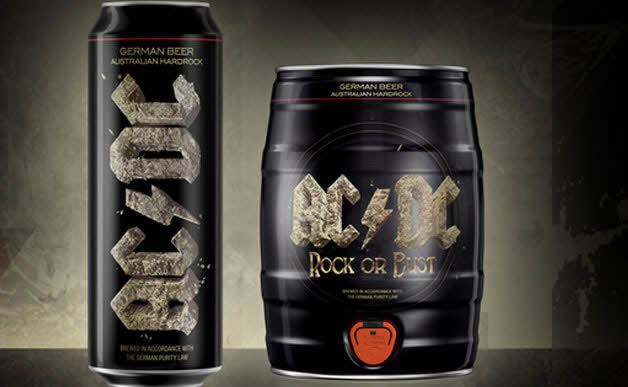 Legendary Australian hard rockers AC/DC have teamed up with ALDI stores to release their own line of beer in Australia. AC/DC Premium Beer features a design inspired by AC/DC's 17th album and current world tour, "Rock Or Bust". The beer will be available exclusively in all licensed ALDI stores in NSW and Victoria on September 30, just in time for AC/DC's upcoming Australian leg of the tour, which kicks off in Sydney on November 4.

The refreshing and easy drinking pale lager is made by German brewery Karlsberg, which has been brewing beer in Germany for more than 130 years. Like all good German beer, AC/DC Beer has been brewed to the "Reinheitsgebot," the German beer purity law of 1516.

Available in either a 568ml can for $2.99 or a 5L keg with integrated beer tap for $24.99, AC/DC Beer is available exclusively at ALDI, and will be available for a limited time only.

"We're very excited to celebrate AC/DC's legendary rock status with the launch of AC/DC Beer in Australia. The combination of great German beer and Aussie hard rock just seems like a match made in heaven," said an ALDI Australia spokesperson.

Formed in Sydney in 1973, Rock And Roll Hall Of Fame inductees AC/DC are considered one of the pioneers of hard rock. They continue to be one of the best-selling bands of all time — with sales of over 220 million albums. The current "Rock Or Bust" tour set a new world record in Germany for the number of tickets sold within the shortest timespan, with more than 300,000 tickets sold out in 77 minutes.

ALDI partners with a number of high-caliber Australian and international suppliers who share their passion for quality and help cater to their expanding range of products.

ALDI gained the title of Australia's best value liquor retailer in 2014, further testament to the excellent quality and value of liquor available at ALDI stores and at www.aldiliquor.com.au.