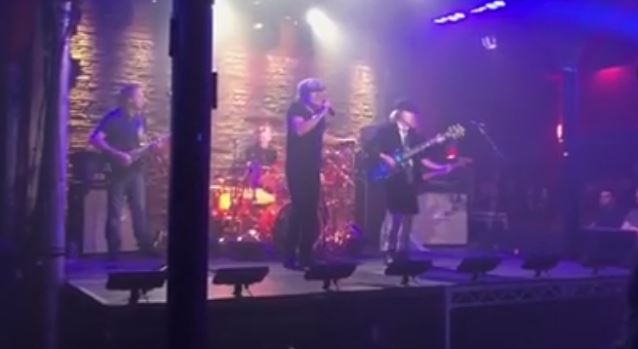 Legendary rockers AC/DC filmed a video for their song "Rock The Blues Away" earlier today (Tuesday, February 10) in Los Angeles. A couple of photos and video clips from the shoot can be seen below.

"Rock The Blues Away" is taken from AC/DC's 16th studio album, "Rock Or Bust", which sold around 172,000 copies in its first week of release to debut at No. 3 on The Billboard 200 album chart. This marks a huge drop from the opening number of 2008's "Black Ice", which topped sales charts in 29 countries, including the U.S. for the first time ever. It sold an incredible 784,288 copies in its first week in this country alone.

As previously reported, AC/DC drummer Phil Rudd will now stand trial beginning on April 21 in New Zealand's Tauranga District Court, according to the AFP. Rudd was originally scheduled to go to trial this Tuesday (February 10) but the date was moved after his lawyer unexpectedly quit the case by what was said to be mutual agreement.

Rudd will face a "judge-alone" trial, meaning that he will go before just a single judge with no jury present.

Rudd was arrested last November at his home in Tauranga on charges of threatening to kill and possession of methamphetamine and cannabis.

Today was surreal! We went to an AC/DC music video shoot unexpectedly; they were literally 5ft in front of me. All their music is amazing, I was so honored to be so close to them! I cried a bit, lol. #ACDC #RockingtheBluesaway #famousasf••k