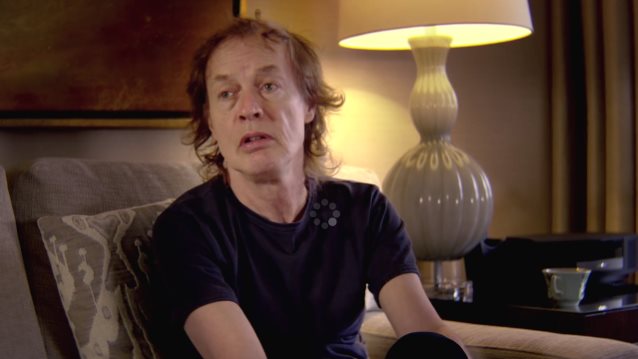 A new two-minute video clip in which AC/DC guitarist Angus Young talks about performing and his role in the band can be seen below.

Says Angus: "For me, music is probably my world; it's what I know.

"I never take things for granted. I like to go and do my piece and hope they like it.

"For us, every show is a new kind of challenge. When everything's happening and it's all cooking and everything gels, it just seems like it's one thing and it all moves together.

"The ultimate feeling is when you've got the audiences joining in; you have a magic atmosphere and they just wanna rock along with you — they wanna ride that wave with you.

"I play guitar when I feel like playing guitar. That's how I learned to play. It was a never, 'You must do that,' it was a case of you wanted to do that and you felt like doing it.

"The music has a lot of power; that's also part of it too. It's simple, but it's also kind of complex.

"Ozzy Osbourne calls us 'meat and potatoes' — it's as good a description as any.

"You're trying also to communicate to the whole building. You're hoping that that sound gets to the very back of the hall, so that they're getting the same feeling as the people who are close.

"Over the years, you can pace yourself. Maybe I'm lucky — I always kind of get a second and third wind. Sometimes I do not know where it comes from. Sometimes I look and I feel [tired], and then, out of the blue, I play a bit of music and then I go, 'Oooh. What am I doing?' And I've moved from one end of the stage to the other.

"Once you are on stage, you go, 'I can't get off now.' The real world goes away, and you get to go into another world. You just get on and you get on and that's it."

Angus recently said that he has not made a decision yet regarding AC/DC's future once the current "Rock Or Bust" tour cycle ends. Following the 2014 retirement of his brother and co-founder Malcolm Young due to dementia, Angus also dealt with the exit of drummer Phil Rudd later that year because of legal problems, and more recently the departure of singer Brian Johnson because of hearing loss and bassist Cliff Williams's decision to retire after the tour ends.