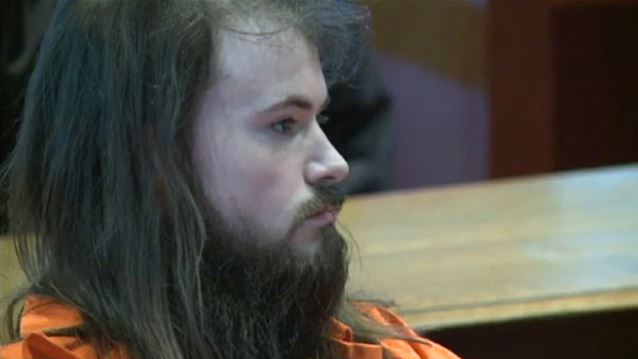 According to CentralMaine.com, a man who claimed that a gun was held to his head in a 2011 incident somehow involving the band SLAYER has been found incompetent to face trial on a charge of murdering his father.

During Monday's (January 5) competency hearing at an Augusta, Maine courtroom, Smith tried to address the judge, who told Smith that if he spoke, he would be removed from the courtroom.

"I have something I want to say," Smith said.

"With my case, they're telling me that my story is delusional grandiose of proceedings that happened, and they're not investigating it.

"The fact of the matter [is that] in 2011 I had a gun pointed to my head and was sworn to keep secret of what I am. And they refused investigating any persons that are responsible. The whole entire music group SLAYER was there. I was told then that what they did was too overboard. I sent them a message on Facebook and that Jeff Hanneman, the guitarist, takes his own life. He took his own life May 5 of 2013."

After Justice Donald Marden told Smith that he would accept anything in writing from Smith through his attorneys and to sit down or be removed, Smith responded, "Then I have no fair trial."

Smith's attorney Pamela Ames told WABI: "To be able to establish any sort of attorney-client relationship is impossible. He thinks our role is to subpoena society and to subpoena certain heavy metal bands to come to explain why they won't let him play with them."

In a court affidavit released last May, Smith described the details of his father's murder, claiming he "filleted" Leroy Smith Jr., stabbed him in the neck and head and buried him in the woods because he had sexually assaulted him his entire life. Smith III said he put his father's remains in black trash bags and placed them in a dumpster. He also said he could point on a map where he left his father's body.

When they went to the location Smith III had described, investigators found a total of 16 trash bags on the side of the road containing body parts and blood-spattered clothing. The clothing included a SLIPKNOT t-shirt, court papers said.

During a May 2014 appearance in Kennebec County Superior Court, Smith claimed to be a political prisoner, and in a subsequent interview with WGME, he claimed he was God.

Ann LeBlanc, director of the State Forensic Service, testified Monday she evaluated Smith twice and found him to have acute delusional thinking. "He had delusions that he thought he was God, grandiose delusions he was the best guitarist in the world," LeBlanc said, adding that he also had delusions that people associated with heavy metal or thrash metal bands were out to kill him.