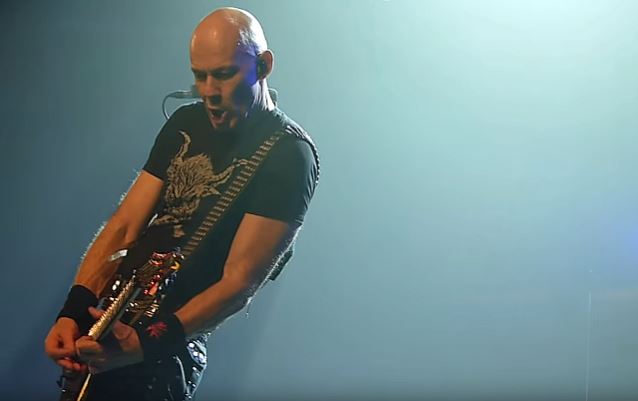 On February 28, Rustyn Rose of Metalholic.com conducted an interview with guitarist Wolf Hoffmann of German/American metallers ACCEPT. You can now listen to the chat in the YouTube clip below. A couple of excerpts follow (transcribed by BLABBERMOUTH.NET).

Wolf: "Well, it's always been insane. I've never quite understood why, to be quite honest… I mean, I live here [in Nashville], I'm a [U.S.] citizen and all that, but I have both perspectives. And I love it here — don't get me wrong — but the political circus sometimes is so bizarre. I mean, just the whole concept of doing this campaigning for two years. What the hell? In Europe, they go to the elections and it takes — the whole thing, the whole process — takes, like, three or four weeks or whatever. They do a little bit of campaigning, debating, and then they all go to the elections. They don't [have] caucuses and delegates, and there's this and there's that, blah blah blah. Why does it have to take so long? It's way to involved, I think, and the money that's involved is just insane."

On the progress of the songwriting sessions for ACCEPT's follow-up to 2014's "Blind Rage" album:

Wolf: "Yeah, we started in January, and we've done… We've put a few things down already, and it's sounding quite well. It's by no means finished. Peter [Baltes, bass] and I write together for weeks at a time and just see what we can come up. Then we give [our ideas] to Mark [Tornillo, vocals], and he puts the final vocals on it. That's the way we've always been working. Peter and myself, we usually start… We do the first step, we do the rough demos, and Peter does some scratch vocals on a lot of the songs, and then Mark does the final [vocals] in the studio."

On how he looks back on the "Blind Rage" album two years later:

Wolf: "I think it's one of the most mature ones we've done. I mean, of course, I love them all, and I think they're all equally strong, but I would definitely put 'Blind Rage' maybe at the top of the list — at least on par with 2010's 'Blood Of The Nations'. [2012's] 'Stalingrad', every time I hear the album, I feel like I wish we would have had a little more time to round out the songs and to go at it again, but we were under immense time pressure. So, to me, I hear that sometimes in the record. But some fans tell me that's their favorite album, so go figure. At the end of the day, you could probably produce an album, produce it to death and work on it again and again, and it probably wouldn't get better. At a certain point, it is what it is, and you've gotta let it go and live with it, I guess."

On his upcoming solo album:

Wolf: "It's in the can, baby — it's done. It's out of my system. Now it's in the hands of the gods of the label and everybody else. And it will be released sometime in the spring — late spring, maybe — worldwide. We'll have to see what the best release date is; we haven't settled on that yet. But my part is done… It's gonna be in line [with my previous solo album, 1997's 'Classical'] in respect to that I've taken well-known classical melodies and sort of just 'metalled' them up for guitar. The difference is I actually recorded this one with an orchestra, so I used real string players. I flew to Prague and worked with a Czech national symphony orchstra, so it sounds a lot more… bigger production and much more dynamic and grandiose than the first album."