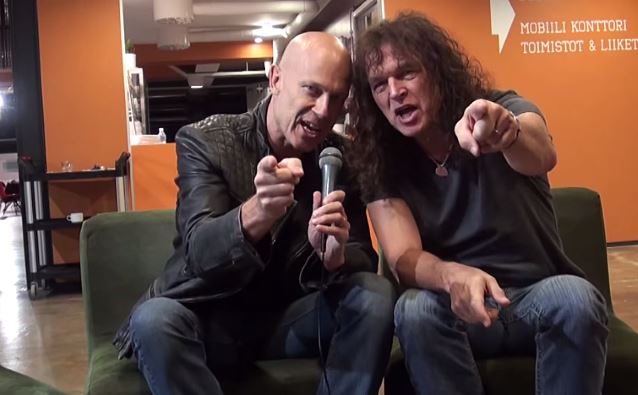 Kaaos TV conducted an interview with guitarist Wolf Hoffmann and bassist Peter Baltes of German/American metallers ACCEPT before the band's September 25 concert at Rytmikorjaamo in Seinäjoki, Finland. You can now watch the chat below.

Asked if they pay attention to reviews and what people write online about their music, Wolf said: "It depends. I try to avoid the Facebook crowd and the Blabbermouth… every little online comment. I don't have the time or the patience or whatever — the mindset, I guess — to do all that. But I read the reviews [of the latest ACCEPT album, 'Blind Rage'] and I've seen that they were overwhelmingly phenomenal."

Added Peter: "I'm the opposite. I read all the Facebook stuff. I'm trying to figure out what the fans think, where they are, how they react to the albums and try to communicate, in a way. That gives us an insight, too, what, for instance, to put in the live set, what people really like. And it's interesting to see how they react. They really, genuinely love the new album. They're all asking the same thing: 'Play as much as you can from the new album.'"

He continued: "It's a new world. That's how we stay in contact. That's how we see how people react, what they want, what they don't like and how they take us. At the end of the day, we do what we want anyway, but it's interesting to see [what other people have to say]… "We're living in an age, too, when fans are used to getting the inside story right away, all the time, and we have to flow with that. So posting pictures [regularly on the social media sites] really makes a difference."

Asked if it is a challenge to constantly keep up with the new technology and the modern way of communicating with their fans, Wolf said: "As you know, we had a very long break in between and we came back, basically, to a new world. And it's not like we've been away from it, because we all had computers and we were all e-mailing and doing online stuff all the time anyhow, personally, but to be in the position as a band… we had to find our way — and we still are finding our way. And I think that it's changing so fast that all of us have to constantly adapt to these new rules and new media and new technologies all the time."

Added Peter: "I think we're doing pretty good. We've got a really nice web site; we have a great following on Facebook. We're doing really, really well. Our fans respond immediately. I'm amazed sometimes; you can post something and within an hour you have 50,000 people reading it and responding. That's pretty cool to have that access. [We have] 797,000 [Facebook fans]. We just passed five million views for [the] 'Teutonic Terror' [video] on YouTube. It's only been out there for four years. 'Balls To The Wall' is is on there for eleven years and has six million views. It shows us that we're on the right track."

The latest ACCEPT album, "Blind Rage", was released on August 15 via Nuclear Blast. Like its two predecessors, 2010's "Blood Of The Nations" and 2012's "Stalingrad", the new effort was helmed by British producer Andy Sneap, who has previously worked with MEGADETH, EXODUS, TESTAMENT, ARCH ENEMY and KILLSWITCH ENGAGE. The cover artwork was created by Daniel Goldsworthy.