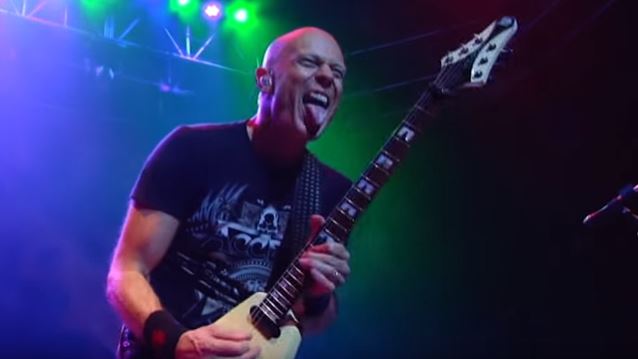 Ghost Cult magazine recently conducted an interview with guitarist Wolf Hoffmann of German/American metallers ACCEPT. An excerpt from the chat follows below.

Ghost Cult: [ACCEPT is] touring on "Blind Rage", but you also have a new solo album out this year. Tell us about that.

Wolf: This has been in the works forever and ever. I've always been busy with ACCEPT. I always go into the studio for a week here or there for years and years that I've been working on this. It's finally now over. [Around] Christmas, I had the time to put it all together and put it in the can, so to say, to get it out of my system. It's a follow-up album to one I did in 1987 where I took some classical pieces and metalled them up for guitar. I did the same thing again. This time I took well-known classical pieces and rearranged them completely for rock instruments. This time around I worked with an orchestra from Prague, the Czech Republic. That was an amazing experience just to go over there and work with these guys. It's going to come out soon, late spring.

Ghost Cult: How has writing and rearranging a classical album expanded your writing for ACCEPT?

Wolf: I think it all helps. It's actually quite mindblowing to see the details of what these grand masters from two hundred years ago what they've actually written. You see how timeless the melodies and pieces. They are so good, so well written. They are mindblowing. You think, hopefully, a little bit of that rubs off on you. At the end of the day, you can't compete with that at all. I'm a metal guitar player doing my thing. It pales in comparison to what Beethoven or Mozart did before. But, I do it for fun because I love it. It's a passion.

Ghost Cult: Was the arranging and writing on your own easier or harder than the process writing with Peter [Baltes, ACCEPT bass player]?

Wolf: I was lucky enough to work with a guy from Italy. He's a good friend. He plays piano. He's really good at string arrangements. He and I pretty much work together like I work with Peter, where the two of us sit in a room and we just hash out these ideas and bounce the ball back and forth. It was kind of similar in that respect. Only, obviously, the medium was way different because he was the guy writing all the string arrangements. I would just sort of tell him how I was hearing things in my mind and he was translating it to orchestra speak. To me, it's interesting to see how not so different it is, even though it is a totally different medium. There's an orchestra and nobody is singing, obviously. And these are old-time compositions, but at the same time, a lot of times there are segments that sounds like ACCEPT somehow just because of the guitars and drums and all that.