New Jersey's metal elite are joining forces on August 22 to play Rock Against Dystrophy's benefit concert, "Rock Out to Knock Out Muscular Dystrophy". The event will take place at New Jersey's rock and metal haven Dingbatz in Clifton, New Jersey. This summer marks the third year of the benefit concert and its second with an all-star lineup. Tattoo Tony of Under My Skin Tattoo is returning for his third year as the event MC.

"When Rock Against Dystrophy started we had big dreams," commented Rock Against Dystrophy co-founder Turbo. "Having Bobby Blitz (OVERKILL), Mark Tornillo (ACCEPT), and others believing in that cause is mindblowing. And to be doing our second all-star benefit happening at Dingbatz is something we never thought could happen and are beyond grateful to them for having us."

OVERKILL vocalist Bobby "Blitz" Ellsworth said about the benefit: "I'm happy to be working with R.A.D. and its founder Turbo. A good cause and a good night are coming to Dingbatz, with a lineup of Jersey's metal-ists."

Tickets for this event can be purchased here.

* BRAND OF JULEZ
* LOWER THE VEIL 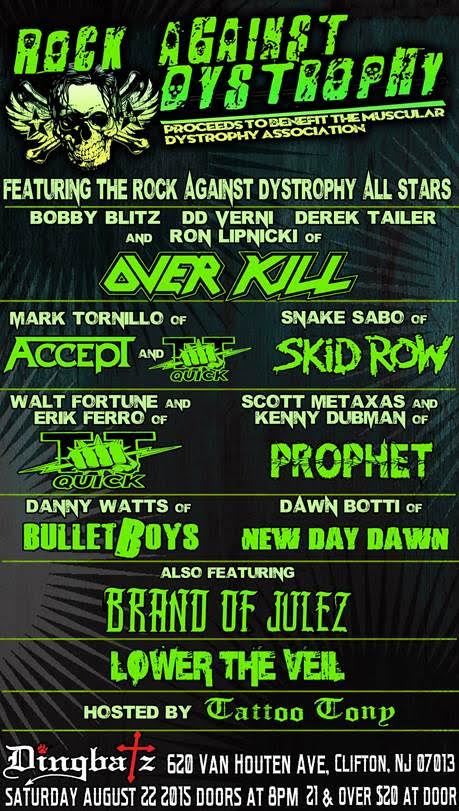