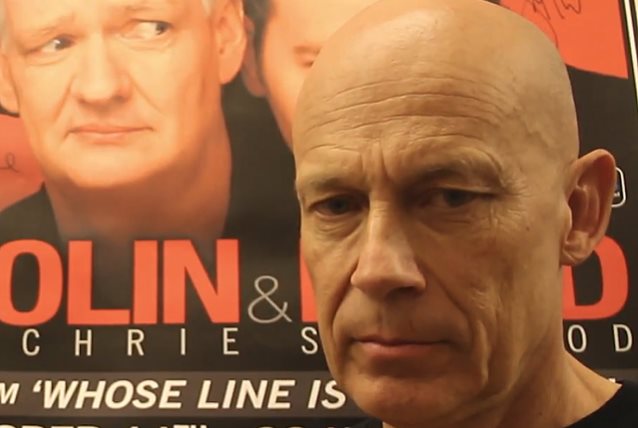 The Jimmy Cabbs 5150 Interview Series spoke with ACCEPT guitarist Wolf Hoffmann prior to the group's performance at The Rose in Pasadena, California on September 30. You can watch the entire chat below. A few excerpts follow (transcribed by BLABBERMOUTH.NET):

On not living in the past:

Wolf: "That was one of the goals that we set [for] ourselves. When we regrouped in 2009, or whenever it was, we said, 'You know, if we're going to do this, we don't want to be a nostalgia act. We don't just want to play the old songs. If we're going to do it, let's make new records, and let's make them so that we're proud of them, and that the fans can dig 'em, you know — something that's relevant.' We didn't want to be just something where the fans know, 'Oh, they're just releasing an album to say they have a new album, but really, we're never going to listen to it.' We really wanted to have something that could stand up to what we've done in the past, and to the best of my knowledge, we've succeeded with that, because a lot of fans are telling me these last four albums are as strong as anything we've ever done in the '80s, and that's a huge compliment when I hear that."

On whether he gets "stressed out" when writing new music that will inevitably be compared against the band's classic material:

Wolf: "I wouldn't call it stressed out. I was aware of the challenges, you know, because the more albums you make, first of all, the harder to gets to not repeat yourself and do something that excites you. I figure if it doesn't excite me, it won't excite anybody else either. As soon as I have the feeling, 'Yeah, this is really good, this really excites me,' then I'm thinking, 'This is good enough to be a release.' Sometimes you have these songs where you go like, [makes unimpressed noise], and you can't just say, 'I don't really care that much — hopefully somebody else will like it.' It doesn't work that way. I think you've got to challenge yourself and come up with something that you think is really the best you can do at that point in time, and that's all you can do. And then, if anybody else, at that point, if they don't like it, I almost don't care, because I like it, and I'm proud of it, and to hell with you if you don't like it.'

On the band's current chemistry:

Wolf: "I couldn't imagine playing in a band where we don't get along at all, and you hate each other, and you've got lawyers suing each other. You hear all these stories, and you wonder like, 'How can you do that?' Nobody's buddy-buddy with everybody all the time. It doesn't work, but at least on a certain level, you've got to respect each other, and you've got to really be friends and get along, because you're spending so much time on the road together, and how in the world will this work if you don't?"

On vocalist Mark Tornillo, who joined the band in 2009:

Wolf: "I always said the stars aligned in the right direction when we met him. Out of nowhere, he came into our life, and we said, 'Here's the guy, and with him, we can do a re-renaissance of ACCEPT,' because it wasn't really a reunion. It was like a rebirth, in a way, more than anything. When we met him, we decided altogether, 'Man, this is our best shot ever — we're going to try this and see what we can do.' We put all our hearts our souls into it and the rest is history. It would have never happened without Mark.

"When we first met him, on that very first day when we had that infamous jam session in New Jersey, we were jamming on, like, 'Flash Rockin' Man', 'Fast As A Shark', all these old songs, and they sounded killer — they sounded like he's been our singer all along. That's what convinced us, and we said, 'If he can do that, heck, he can do anything.'"