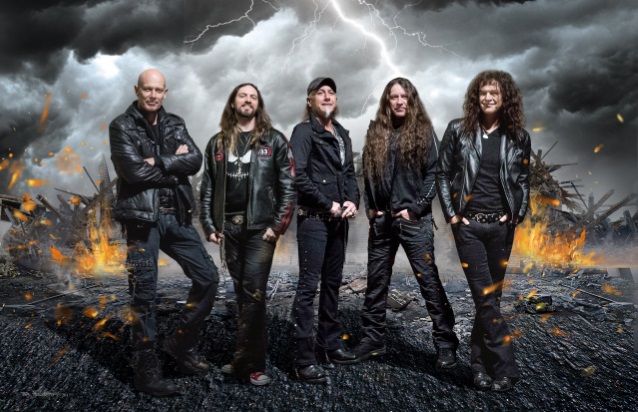 ACCEPT bassist Peter Baltes was recently interviewed by Italy's SpazioRock. The full conversation can be viewed below. A few excerpts follow (as transcribed by BLABBERMOUTH.NET):

Peter: "We got very good reviews. I think part of it [was] because the day before it came out, we headlined [the] Wacken festival, and it was streamed all over the world, over a million people watching the performance. The reviews that we got were just really, really good. I think it entered [the charts in] Germany at No. 3. We're all happy. We worked long on the record. It's difficult sometimes — it takes a little bit more time — and we're really proud of this one, though."

On whether he believes the world is getting more chaotic:

Peter: "I think there always was chaos, but it seems like right now, because we all have social media, every kind of chaos is right there. We read it every day, and there's way more. In the old days before this, people wouldn't know about a lot of things — you had television and newspapers, and that was it, and the newspaper's a couple of days old. Now, we know instantly what's going on in India, what's going on in Russia, in Germany, in America, so we notice there's a lot of chaos in this world, and a lot of things going on that are strange, so the title was quite appropriate."

On the group's Wacken performance, during which they played with an orchestra:

Peter: "It was totally different. We rehearsed a couple of days in Prague, and everything has to be very precise, because the orchestra just plays by the paper, so everything has to be perfect. Just to get everybody on the big festival and backstage and set up, it was quite an undertaking, but I have to say in the end, it was an incredible experience, [and] for the fans too, and something that's like a milestone in the ACCEPT life so far."

Peter: "It's incredible down there. I think it's the capital of heavy metal, that's for sure. We were fortunate to play a lot of countries — I think 13 shows — [and] went to Uruguay for the first time. Some countries, we did already, but I think we did four shows in Brazil and then did Costa Rica at the end. Truly love it."

On what he would "preserve" from the "Eat The Heat" and "Predator" albums:

Peter: "Every time or every period in life, there's a reason for it. 'Eat The Heat', even though people say, 'Oh, it's not a good album,' I think there's some really good songs on it. But it was produced kind of strange, and it didn't sound so ACCEPT at the time, so people who liked ACCEPT obviously said, 'I'm not sure about it.' There's a couple of songs on there — 'X-T-C', I really like. I would preserve that. 'Predator' was the same thing — there were a couple of cool songs on there, like 'Crossroads' where I was singing a duet with Udo [Dirkschneider]. It was kind of cool — different kind of things. I guess these are the things I would preserve. Some others, I wouldn't."

Peter: "It seems like sometimes, we're just getting started. We really feel very energized. When we came back and wrote 'Blood Of The Nations', we realized how important it is for a band to write new material. Otherwise, we're just a cover band of ourselves, and playing old songs. We can do that too, but we always wanted to stay with the times. We always think we have something to say still, and music still has to be written, so as long as we have ideas and riffs and stuff that we think are worthy, that fans would like, we keep on going. There's no reason to quit. It's the best job in the world. Every night, we spend two hours up on stage, and there's nothing better. It's the best drug you can ever take. It's the only drug we ever take. [Laughs]"

ACCEPT is currently touring the world in support of its Andy Sneap-produced fifteenth studio album, "The Rise Of Chaos", which was released last August via Nuclear Blast. The cover artwork for the disc was created by the Hungarian artist Gyula Havancsák.