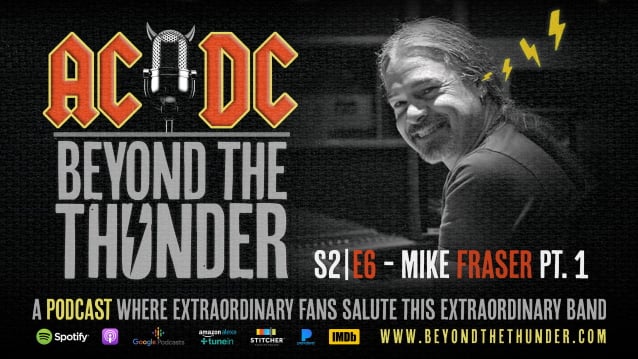 If there were ever to be a sixth member of AC/DC, Mike Fraser, Canadian record producer, engineer, and mixer is that guy. "AC/DC Beyond The Thunder" sits down with the man with the golden ears in this two-part podcast episode touching upon Fraser's humble beginnings as a studio janitor to becoming one of the most sought-after people behind the control board. Fraser has not only recorded and mixed the last six records for AC/DC over the past 30 years, but has also racked up a dozen other band-related projects, including live concerts, box sets, soundtracks and even remastering the entire AC/DC iTunes catalog.

"The doorbell rang…and there's Stewart," Fraser recalls. "Stewart's quite a big guy, 6'4", something like that, and I thought it was his son there. Then I realized, 'That's not his son, that's Malcolm!' I never realized [his] stature before until you see him in person. [AC/DC's] sound is so big, you don't think of them as being small guys."

During the episode, Fraser goes into great detail about each album, band member, recording process, studio equipment and producers he's worked alongside; from the untimely death of his mentor, Bruce Fairburn, to the never-present, ever-meditative Rick Rubin, and even working with Angus and Malcom's older brother, the late, great George Young,

"What a thrill to meet George," Fraser says. "Mal and Ang would occasionally have differences, and sometimes...it got sort of heated. George was great when the differences went on for a little while — they'd be in the room for an hour yelling at each other — and George would be the big brother and walk in and say, 'Okay, you guys, that's enough.'"

From covering heartfelt topics about Malcolm's debilitating disease to triumphant first takes, audiophiles will surely be thunderstruck by this latest installment of the podcast where extraordinary fans salute this extraordinary band.

The new episode is broken into two segments; Part 1 discusses Fraser's professional career and successful 30-year history with the band, and Part 2 solely focuses on the highly anticipated new release, "Power Up", featuring questions for Fraser served up by AC/DC fans around the globe.

"Power Up", AC/DC's seventeenth studio album is set for release on Friday, marking the return of vocalist Brian Johnson, drummer Phil Rudd, bassist Cliff Williams, rhythm guitarist Stevie Young and lead guitarist Angus Young. This will also be the band's first album since the death of their Malcolm Young in 2017 and serves as a tribute to him.

Wondering if the film would ever catch lightning, Ferguson and Squiers decided to unearth these wonderful stories of extraordinary fans discussing their affinity for AC/DC and harness that energy into a vehicle that just might work…a podcast. After capturing over 50 interviews and with a newfound momentum to create all-new episodes with sound engineer Eric Kielb, "AC/DC Beyond The Thunder" is back, serving up inspirational stories about the fans, for the fans, by the fans.