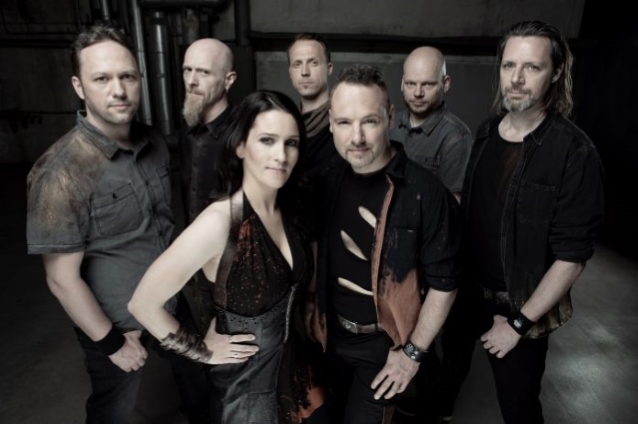 German a cappella metal band VAN CANTO has released the official music video for its cover version of the AC/DC classic "Hells Bells". The song is taken from VAN CANTO's seventh studio album, "Trust In Rust", which came out last August via Napalm Records.

Since 2006, they have brought pure vocal power to the metal world. Now made up of seven members, VAN VANTO's "Trust In Rust" covers a wide stylistic range, from melodic to bombastic, showcasing the band's takes on ballads, hard rock ballbreakers and speed metal anthems. Covers, ranging from HELLOWEEN's "Ride The Sky" (featuring HELLOWEEN's Kai Hansen) to the aforementioned "Hells Bells", give listeners a completely fresh glimpse at the vocal crew. The sound of "Trust In Rust" reflects VAN CANTO's varied experiences on the road with unbroken power and passion for the human voice in heavy metal.

Singer Stefan Schmidt told Metal Hammer that VAN VANTO is "still the only a cappella metal band" in existence, more than a decade after the group's inception. "I don't know if that's a good thing," he said. "Maybe people think we're doing it so well that they don't want to try it, or they think it''s rubbish and steer clear of us."

Schmidt went on to say that VAN CANTO's a cappella approach opens more creative doors than it closes.

"We have that freak factor, we have a style not everybody likes, but we wouldn't have tried it for [more than] 10 years if nobody cared," he said. "We're living the dream — as long as we’re playing shows and people turn up to listen to us, we must be doing something right."