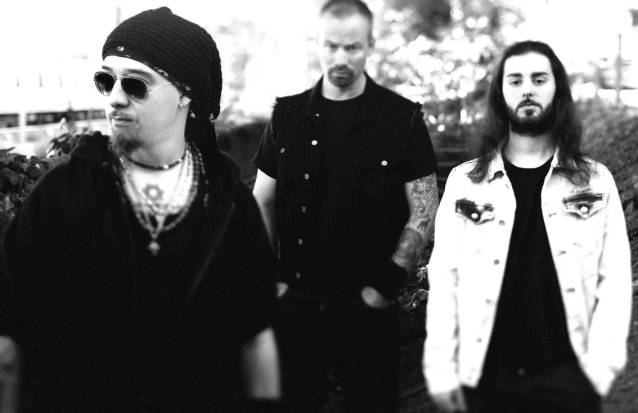 "Bleedthrough", the new video from Italian/Norwegian hard-industrial-electro extreme metallers ABORYM — who feature in ther ranks Fabban and Paolo Pieri (HOUR OF PENANCE) along with drummer Bård G. "Faust" Eithun (BLOOD TSUNAMI, MONGO NINJA, ex-EMPEROR) — can be seen below. The clip was directed and filmed by Andrea Mazzucca and the Victorlab crew and features the model-actress Tanya Mishchenko.

Fabban's mask used in the clip was created by Monica Mangioni and Alice Siracusano.

ABORYM's sixth full-length album, "Dirty", was released on May 28, 2013 in Europe and June 11, 2013 in North America via Agonia Records. The 10-track double album (cover below) was made available in digipak, jewel case and gatefold double LP formats.

"Dirty" was recorded at the Fear No One Studios in Italy with Emiliano Natali, reprising his sound engineer role from the band's "Psychogrotesque" album, and was helmed by Marc Urselli of New York's Eastside Sound Studio, who previously worked with the likes of Mike Patton and Lou Reed. The electronic part of the album was engineered by D. Loop (KEBABTRAUME, LIMBO). R.G. Narchost (STORMCROW, DEMON'S SHADE, DROWNING ASHES) created "The Spiral Shaped Chamber" custom sounds library for the band. Artwork for the album is by ABORYM's Fabban.

The first CD of the album features new material, while the second CD features two tracks from previous albums, which have been completely re-arranged and re-recorded, covers of tracks by IRON MAIDEN, PINK FLOYD and NINE INCH NAILS, and a previously unreleased track performed by both musicians such as Agonia BV, Tamara Picardo, Samuel Heru Ra Ha MK, Hostis, Ulven, Mike Bizzini, David Cholasta, Tobias Dünnebacke, Jonathan Butcher, Jessy Lavallee, Thomas Hochstetler, Mary J. Rooks, Amanda Neilson and Mark Llewellyn, as well as several fans. The song was written by Alberto Penzin (CO2, ex-SCHIZO) and was spliced together from all the different sources.