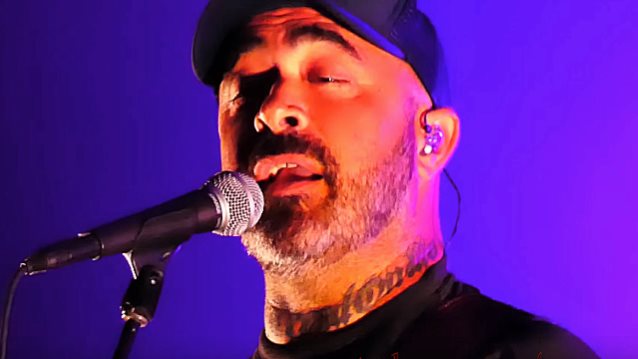 STAIND frontman Aaron Lewis was recently interviewed by Craig Mathews of the 104.9 The Surf radio station. You can now listen to the chat using the SoundCloud below.

Asked if "the touring machine of STAIND" is going to be headling out anytime soon, Lewis responded: "The touring machine, as you call it, of STAIND will never be again. Not like that, no. Never. Never. I could never go back to playing six shows [a week] eight weeks in a row. I can't do that. I have grown in my age and become very accustomed to playing Thursday, Friday and Saturday and being able to go home for a few days and unwind and try to kind of have a life aside from doing this." He added: "I worked really, really, really hard to get to this point where I can play three days a week and still do just fine."

The encore of this past Friday's (August 4) Aaron Lewis And Friends benefit concert at Pines Theater at Look Park in Northampton, Massachusetts featured three original members of STAIND — Lewis, guitarist Mike Mushok and bassist Johnny April — with current drummer Sal Giancarelli performing a three-song acoustic finale that included "Outside", "Something To Remind You" (see video below) and "It's Been A While".

STAIND has been mostly inactive since 2011 and Lewis said in a recent interview that the band is probably going to stay that way for the foreseeable future. He told Planet Weekly: "I definitely see it staying on hold for a while. I've got to stay focused on this [country career]. I've got to take this to where it needs to get to before I can start risking things with the good ol' boy network reception and throwing in a handful of STAIND shows in the summertime along with all of my country shows. But that's down the road. I can't even think about that right now."

Mushok admitted to Canadian journalist Mitch Lafon last year that it has been "a little frustrating" having to put STAIND on hold while Aaron continues to record and tour as a country solo artist. "People come to me [and say], 'Don't you get mad? Aren't you angry…?' And I'm, like, 'Well, I can't be. He has to be happy with what he wants to do,'" Mike said. "And if [he's] not happy… No matter what I do, when I go to Aaron, I can't [say to him], 'Dude, we have all these offers. We've gotta play these shows.' I can't make him. And if I did make him, he'd resent me. And it wouldn't be fun, and it wouldn't be what they're supposed to be. So when the day comes that he decides, 'Hey, man, let's do this again,' either I'll be ready or I won't. It's either, 'No, man, I'm doing this [SAINT ASONIA] now, because you had your thing,' or we'll be on a break, or whatever it is, and I'll say, 'Okay, we can do it.' So I'm really just kind of playing it as it goes."

Lewis made his debut as a country artist with the 2010 EP "Town Line", which he followed up in 2012 with his first full-length solo album, "The Road".