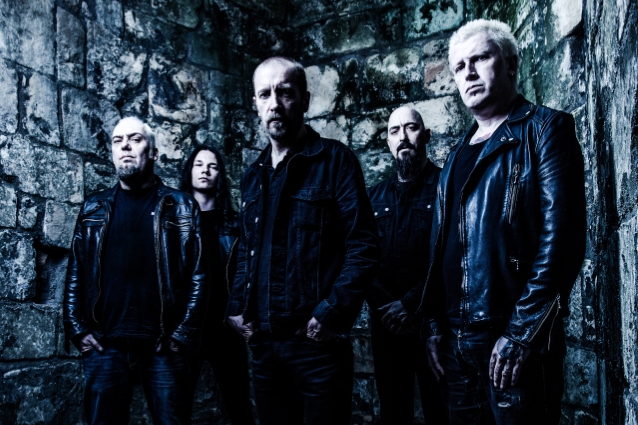 Diamond Oz of Metal Underground conducted an interview with guitarist Aaron Aedy of U.K. gothic-doom pioneers PARADISE LOST prior to their August 7 concert at Brixton Academy in London, England in support of DANZIG. You can watch the entire chat below. A few excerpts follow (transcribed by BLABBERMOUTH.NET).

Aaron: "Personally, I think it's one of the most complete albums we've done since 'Draconian Times'. I think it's the next step, the last song we wrote for 'The Plague Within' was 'Beneath Broken Earth'. When Greg [Mackintosh, guitar] sent it over, it was literally four weeks before we went into the studio and Greg sent it through and he didn't tell me anything about it, he just said, 'Have a listen.' He knows I love doom. Me and Greg love doom. I was like, 'Flipping heck. Incredible.' We would play 'Beneath Broken Earth' every night, we were finishing summer festivals with it; it was like the anti-summer song in a way. I think it was a progression from that, from 'The Plague Within' writing cycle. It's very riff-centric, the new one. But, I mean, it still blends very well with different parts of our history, we've changed our style quite a lot. We've got 190 songs to choose from there, so there's only so many you can play in an hour and a half. We can slot different ones and they fit in quite nicely."

On how he sees "Medusa" in relation to their other studio albums:

Aaron: "I don't know because we seem to have points where albums seem to come in pairs in a way. It's like 'Icon' and 'Draconian Times' and 'One Second' and 'Host' and 'Believe In Nothing' and 'Symbol Of Life' and etcetera. This one seems like a nice addition to 'The Plague Within'. I don't know. We're really enjoying two guitar players, riffing away, harmonies, but then again, we never sit down and go, 'Maybe the next album we should do this.' We let them develop and whatever Greg is writing, he could have six songs and the next six songs could be nothing like them, if you know what I mean. The first four songs of the album, they might be slow, so it might be a slow album, then three could be fast. It comes in spurts. We never plan ahead. I think 'Medusa', I think it's great, especially being around our 30th anniversary, there's quite a few different areas of the past. I think 'The Plague Within' had a lot of different parts of our past, but 'Medusa' had 'Shades Of God' and our earlier era, I think, if anything, but with the lessons we've learned over the years in between."

Aaron: "Gomez [Arellano, producer] has done an amazing job with the remixes because we didn't have a lot of the original stem recordings. He's done an amazing job. 'Believe In Nothing' sounds better. The only thing is that 'Believe In Nothing' has some great songs on it, but we've never liked the mix. When we originally got the mixed, it was so bad; it sounded not right. It was sent out to journalists in 2000, I think it was, and they said 'We're going to remix it,' but EMI said it was getting too close to 'superstar traffic,' which was Christmas, so by the time the mix was set up, they decided to release it in February, but a journalist put it on Limewire or something like that. It was on the Internet for six months before it was released. That killed the album for us. The mix still wasn't the best. Gomez, he's done a fantastic job. He's an old-school guy, but it's funny — he gets us. He's done a really good job on both of them. He's sort of given them both new life in a way. 'Host' is a brilliant album, but my problem with 'Host' was like it was a pop production. It was very flat. We were playing the songs on the 'Host' tour, we were playing them live, the dynamics and bits that came in, it was a lot more dynamic live. I have extra guitar parts and I had to play with more effects on that because during the recording of 'Host', Greg got a keyboard that he used for the guitars, so I said, 'Go for it. Whatever you want to do.' When we were recording, it was really interesting because I was playing with effects I didn't know how to use and didn't normally play with. I'm normally a rhythm guy. It was good fun in that way to do that. It's our most miserable record if you're talking about doom and gloom. That's the gloomiest record. It's really dark. It's after Nick's [Holmes, vocals] dad passed away. The lyrics are really dark as well. Yeah, Gomez has done a great job. He's done a good job with the new one as well. I was chuffed to bits with it."

On the atmosphere surrounding PARADISE LOST during "Host", an album that saw the band abandon their doom metal roots in favor of electronic music:

Aaron: "There's a bunch of things that happened all at the same time: We all cut our hair, were on EMI and we did an electronic record and that was too much. People said if we had long hair, the mix would have been better, people would have handled it better. Most people blamed EMI and it wasn't EMI at all. I remember when we gave them 'Host' and Michael at EMI goes, 'Hmm. I was expecting something heavy.' They were wanting a heavier album; it wasn't them. Then it's like when stylists came when we were doing photos. It was a bunch of things. I mean, basically, we were Robbie Williams's tax write-off. We did a few festivals with him that were ridiculous. God, we spent a lot of time drinking on EMI. My liver. The main people at EMI were good, but the problem we had was in different territories like Norway where we normally did pretty well, but EMI said, 'No, you're doing pop.' That was the problem: EMI Germany, EMI U.K., were brilliant and other territories were great and other ones just didn't care. It was great working with them. Century Media were great. It was very much like the MFN [Music For Nations] days again; people were doing it for the music. Like the Nuclear Blast people, people who actually love the music working on it and that makes you more excited. That's helped push us along."

PARADISE LOST will embark on a North American headlining tour with Iceland's premiere psychedelic post-metal export SÓLSTAFIR, as well as THE ATLAS MOTH. The tour kicks off October 2 in Baltimore, Maryland and wraps October 21 in San Francisco, California.

"Medusa" was released last September via Nuclear Blast. The artwork was created by Branca Studio and shows the infamous Gorgone Medusa from Greek mythology, carrying venomous snakes as hair and turning anyone into stone who would dare to look into her eyes.