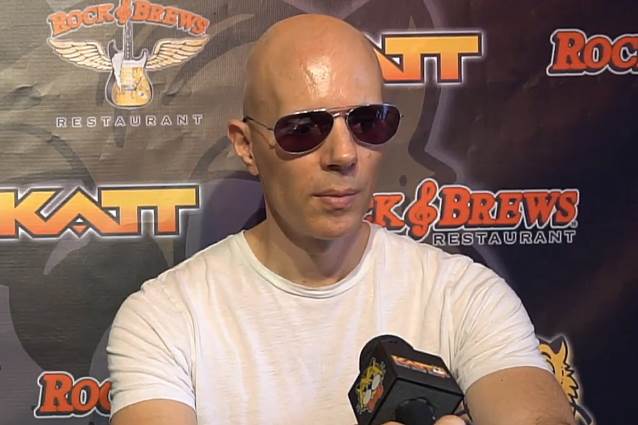 Prior to A PERFECT CIRCLE's performance at the Rocklahoma festival last month, guitarist Billy Howerdel spoke with Cameron Buchholtz of the Oklahoma City radio station Rock 100.5 The KATT. The full conversation can be viewed below. A few excerpts follow (as transcribed by BLABBERMOUTH.NET).

On why it took so long for the band to make a new record:

Billy: "Life stuff in between. Other bands, other commitments, inspiration, finding the right moment, all that stuff. Nothing really particularly magical or waiting for it to happen. Maynard [James Keenan] found a hole in his schedule; I was open; and we did it."

On when the band started working on the album in earnest:

Billy: "A lot of the songs were in 2014 — a lot of the snippets of music, at least. I started giving Maynard pieces — I gave him three or four songs back in '13-ish. Most of these songs on this record were from 2014 on, and a bunch of them last year in 2017. When we worked on the record, it was fleshing some of those early ideas out but coming up with some new stuff. The record creation process was really truncated to a year and concentrated to six months."

On how he and Maynard work together:

Billy: "I don't tend to finish things out so much anymore. There's some songs that were a little further along. Some were very rough sketches, but I could kind of see where they were going to go, and there was a few that weren't that far along, like 'Contrarian' — that was, like, a very simple little thing, and then when he added vocals to it, it very much took off. Things escalate exponentially when a good vocal gets on there."

On the record being less riff-driven, despite the fact that he plays guitar and writes most of the band's music:

Billy: "I put the guitar down to pick up the keys some years ago just to give a different approach to songwriting, get out of muscle memory and things like that. But certainly there's a lot of guitars on the record. When I listened to it to sequence the record, clumping things that were heavier, there's a lot of density on the record. Maybe it's just content of words or overall density. It felt like a more — not more dense record, but it's a different record. It's who we are today as opposed to who we were 18 years ago."

On how the band replicates that "dense" sound live:

Billy: "Carefully picking what's the most important thing, what's the essence. We do have some things on tracks, but we're always extracting out... The way we do it in rehearsal is, we play to a lot of tracks, and then start X-ing them out, color-coding them on the computer. By the time we get down to yellow is what's left to be on tracks, and those are things that if the playback stopped, it's not going to be a big deal. They're just kind of icing on the cake things. That's why the atmosphere is important to me, the effects. Getting that soundscape together is the big puzzle that's interesting to make the live show happen to reproduce the record, because it's never going to be the same."

Billy: "[FAILURE] are an amazing band, influential to us, so we're lucky to have Greg in this position, just like we were lucky to have James. I've known this day would come for a while — James and I have been talking about it for years — and we just didn't have anyone set, so when Greg was available, it really made it easy. He's in the family; we're friends; he's a great musician; and it was an easy fit."

On whether he plans to revisit ASHES DIVIDE:

Billy: "Yeah. I'm working on... I've been so wishy-washy on whether I'm going to call it [ASHES DIVIDE]. I don't know what it's going to be called. It might be called ASHES DIVIDE. It might have a porn star name or a hooker name, whatever I come up with. I've been working on it right now in the form of what I did in 2016 with ['Eat The Elephant'], which is listen to songs, what fits together, what would be a good cornerstone, foundation of a record, and I'm kind of feeling pretty good about that. I hope a year from right now, something's coming out."

A PERFECT CIRCLE's new album, "Eat The Elephant", was released on April 20. It is the band's first collection of studio recordings since the 2004 covers LP, "eMOTive".

"Eat The Elephant" debuted atop numerous Billboard charts, grabbing the No. 1 spot on the Rock, Independent and Alternative Albums charts, a No. 2 entry on the Top Current Albums chart (for pure album sales) and a No. 3 album debut on the Top 200. This is the band's fourth consecutive Top 5 debut on the Billboard 200.