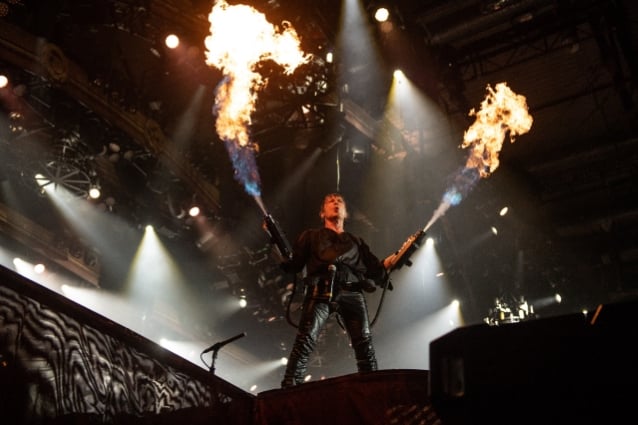 A 9-year-old in Oregon recently received a birthday present he will never forget: IRON MAIDEN tickets. His dad is taking him to see his favorite band in September in Portland.

A short video of the boy getting the gift from his father can be seen below.

In a 2017 interview with the San Francisco Chronicle, MAIDEN vocalist Bruce Dickinson said that the band's fanbase is "formed of lots of layers of different age groups. Every layer sticks to the layer underneath it and doesn't detach," he explained. "People come to a show expecting to see people of my age, and they get a whole bunch of kids between fifteen and twenty-eight.

"I don't want to go onstage and look out at a bunch of crumblies my age," he continued. "People of my age go along to shows, but you never see them in the mosh pit — mainly they're standing by the toilet, waiting to get their prostate problem solved. We like seeing rabid kids leaping around. That's what makes our hearts pump onstage. Our music is still fierce. It's still in your face."

MAIDEN's "Legacy Of The Beast" tour will hit 33 cities across the U.S. and Canada beginning in July. Support on the trek comes from THE RAVEN AGE. Additionally, FOZZY will be guests for the Banc Of California Stadium show in Los Angeles.

For his ninth birthday, this kids parents surprised him with concert tickets for his favorite band Iron Maiden.