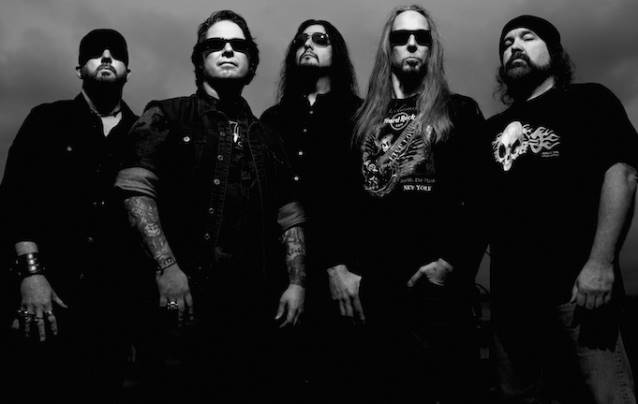 A new video message from reunited thrash metal pioneers DARK ANGEL about their upcoming tour can be seen below.

Legendary artist Ed Repka has redesigned the classic DARK ANGEL logo with amazing results. Check it out below.

DARK ANGEL guitarist Jim Durkin comments on the band's new logo and 2014 return: "I can't tell you how happy I am about the return of DARK ANGEL in 2014. These are a great bunch of guys and I wouldn't have it any other way.

"We went back to our roots and got Ed Repka involved in the redesign of the classic logo.

"DARK fuckin ANGEL have been working very hard on the music, I cannot wait to bring this monster back to the fans."

As previously reported, DARK ANGEL will reform for a limited number of appearances in 2014 in the U.S. and select festivals in Europe.

The confirmed lineup for these rare and unique, select 2014 shows will be:

Comments Hoglan: "DARK fuckin ANGEL has been working real hard behind the scenes, and I can't tell you enough how happy we are to bring this beast back to the fans.

"I'll admit before the rehearsals I really didn't know what to expect, but let me tell you, you to will be as stoked as I am.

During an appearance on the September 8, 2013 edition of the "Heavy Metal Mayhem" radio show, Hoglan spoke about the DARK ANGEL reunion, saying: "The most important thing for, I think, any of us, and especially me, and I know a couple of the other guys that are involved that the legacy of the band is very important. And if the band has attained some of kind of underground legendary status over the years, then if we do wanna return, a lot of people have great expecations of us, we'd better exceed those expectations.

"Like Ron Rinehart said, the definition of 'good' is 'not bad.' [laughs] We don't wanna come out and even be great; we wanna be No. 1. And that's a very heartening attitude.

"Death Is Certain (Life Is Not)" rehearsal footage: