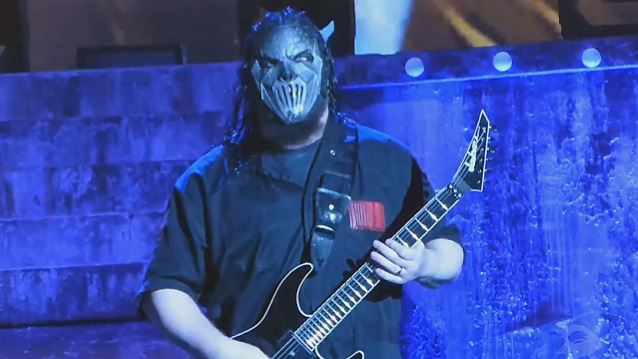 According to the San Bernardino County Sheriff's Department, seventeen people were arrested during the second day of Ozzfest Meets Knotfest at San Manuel Amphitheater in Devore, California. The violations included a single-vehicle traffic accident (rollover) where the driver was found to be driving under the influence. Occupants of the vehicle were injured in the collision. The majority of arrests were alcohol-related.

Six attendees were transported to the hospital for variety of non-life-threatening medical reasons — two altered state, two knee injuries, one neck injury, one under the influence.

About 25,600 people attended the event on Sunday, with 3,470 campers on the festival grounds.

As previously reported, thirty people were arrested during the first day of Ozzfest Meets Knotfest. Ten other attendees were transported to the hospital for various medical reasons. Most of the arrests on Saturday, September 24, were also alcohol-related.

SABBATH singer Ozzy Osbourne and bassist Geezer Butler were asked what they thought such a massive show said about the state of rock music. "I don't know about the state of rock music, but I'm just gonna go up there and have some fun, you know," Ozzy said. "We're not trying to make a statement to the industry, we're just gonna have some fun." Geezer added: "It's good that we're still going and this kind of music's still going. To do something this big proves that it's still as popular as ever."

Saturday's show was the last ever for BLACK SABBATH in California. The band is in the final months of its farewell tour and will play three more U.S. shows in Texas this November before visiting South America. The legendary act will end its run with a series of U.K. gigs in early 2017.

Ozzfest started 20 years ago and was the first national music festival of its kind dedicated to hard rock music.