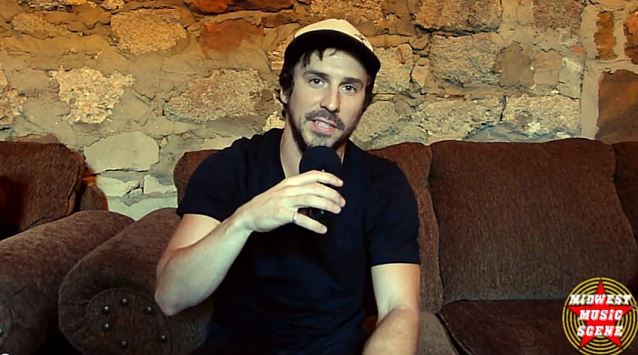 Midwest Music Scene conducted an interview with singer Jesse Hasek of Knoxville, Tennessee hard rockers 10 YEARS on August 25 at Cain's Ballroom in Tulsa, Oklahoma. You can now watch the chat below.

10 YEARS' sixth studio album, "Minus The Machine", was released on August 7, 2012 via the band's own label, Palehorse Records. The disc follows up the band's last effort for a major label, 2010's "Feeding The Wolves", and bassist Lewis Cosby told The Pulse Of Radio that becoming independent again gave the band a new jolt of energy. "This time around, it felt like we were an unsigned artist again and we were able to do whatever the hell we wanted to do," he said. "Complete freedom, complete control — there's not a track on this record that we're not just super-proud of. It was such a pleasant experience this time, we really had fun."

Jesse Hasek said about the album, "We're proud of this album in its entirety. That speaks volumes to us because we're our own worst critics. We pick everything apart. An album is your child, it's your baby, and you know it better than anyone. To sit back and be 100 percent proud of what we've accomplished is so gratifying, and we think everything else will fall into place."